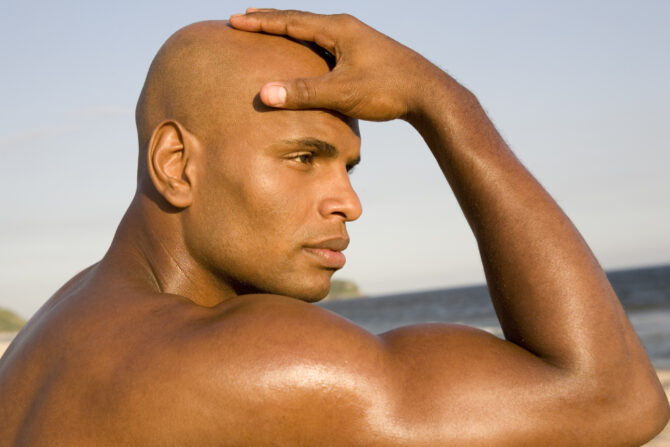 Rocking a chrome dome? Exhibiting male pattern baldness? You just moved to the front of the line for many gay dudes, as users of the Reddit community r/AskGayMen can attest.

In a recent thread on that subreddit, one person wrote, “I’ve always been attracted to bald and balding guys. It’s at the top of my list for what I look for in looks. But I’ve always wondered: Is this a common preference/fetish? Because it’s not an archetypical ‘tribe’ like bear, twink, or otter.”

Whether it’s a tribe or no, a lot of other Redditors could relate! Sure, there were some men who said they prefer their matches to have full heads of hair, but many commenters said that baldness—or balding-ness—was a turn-on. Here are some of their glowing reviews, including a story from a user who said he’d never go back to having hair.

“Same. I just want to kiss their head.”

“My boyfriend is bald and it is so sexy. Love to hold his head in my arms and kiss his forehead.”

“Yes, I like bald guys. I am bald myself, and it’s common for bears, by the way.”

“100 percent agree. I’m not even sure why, but they just make me feel a certain way…”

“I personally have not had a problem with bald guys. I generally like it. And on myself, I feel like my bald head really makes me look better, and it’s less work, for sure.”

“I agree. Seems like I have been speaking to many [men] who are older and bald.”

“Me! My current partner is bald, but I’ve always found them sexy — especially with some facial/body hair.”

“I’m bald, [and] my boyfriend loves it! I remember watching a YouTube video several years back. Someone was drawing a graph and added a smiley face. He went to continue talking, then paused and drew a few hairs on its head to ‘give it more confidence’ before continuing. I sat there with my bald head, absolutely dumbstruck. I’ve never felt more confident. I genuinely feel like a new man every time I shave my head completely. I’m not religious in the slightest, but being bald is a blessing. I wouldn’t change it for the world. In fact, if I could take a tablet that would stop any hair from growing on my head, I’d swallow that shit in a heartbeat.”