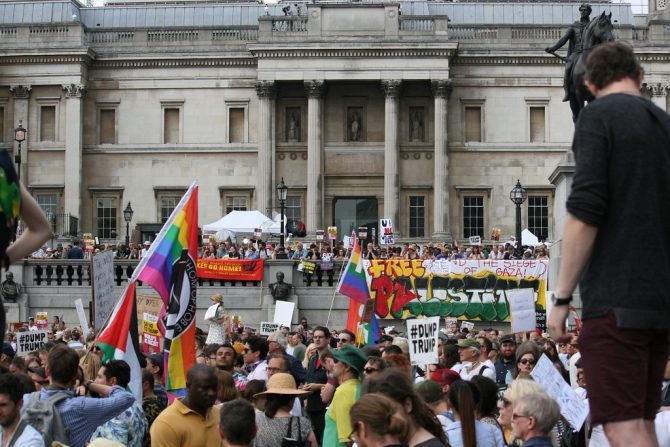 Thousands of queer protesters–and allies–greeted a visit by Donald Trump to the United Kingdom this week, all with a singular message: We don’t like you. Leave.

Trump traveled to the UK to meet with lame duck Prime Minister Theresa May about the upcoming Brexit, when the UK will leave the European Union. During his trip, Trump will also meet with the Queen to discuss various diplomatic issues.

The Brits gave the US President one hell of a greeting. Thousands of demonstrators took to the streets of London, complete with protest signs and bullhorns, to protest Trump’s pro-Brexit stance, his history of lies and corruption, racism, and most of all, his discriminatory words and policies against the queer community.

“We need to send a message that there is a corruption in the world, and Donald Trump is an embodiment of that corruption,” protester Sam Kelly, who claims a large portion of the crowd was LGBTQ, told GayStarNews. “He is the sickness that sits within us all that we keep in control. And he shows it to that world, and he is the face of the Western world. His erosion of liberties that we have taken for granted for over a decade or so. That we, in the UK, take for granted every day in the run-up to Pride. We go and have a party, but meanwhile, in the US, they’re having it all taken away.”

Trump dismissed the protests as “fake news” and labeled them “very small.” In actuality, thousands of demonstrators crowded Trafalgar Square, forcing street closures. Despite claiming he supports LGBTQ rights, the Trump Administration has instituted a number of nakedly discriminatory policies, including a ban on transgender military service, immigration guidelines designed to attack queer families and standards that would allow businesses to discriminate against queer people.