The shocking moment came after Rock made a joke about Smith’s wife, Jada Pinkett Smith, who has alopecia. Rock said Jada was waiting for “GI Jane 2” (the movie in which Demi Moore sported a crew cut).

At first, Will Smith laughed, but wife Jada looked unimpressed. Moments later, Will Smith strode up to the stage and forcibly slapped Rock.

He then returned to his seat and shouted at Rock to, “keep my wife’s name out your fucking mouth!”

Within the hour, Will Smith had won Best Actor for his role in King Richard. He gave a tearful acceptance speech, apologizing to the Academy for his actions.

Several LGBTQ celebrities have responded to the moment. Variety’s Marc Malkin caught up with some of them at the ceremony, including Colman Domingo.

Billy Eichner said he thought he was “dreaming” when Will Smith took the stage and hit Chris Rock: “I thought it was a really great show until it took an odd, unexpected turn” https://t.co/BHK0NQAKnm pic.twitter.com/CAEjOtZykD

Related: Billy Eichner casts LGBTQ actors in all the main roles for his new studio rom-com

Sandra Bernhard also looked back at other Oscar gaffes. 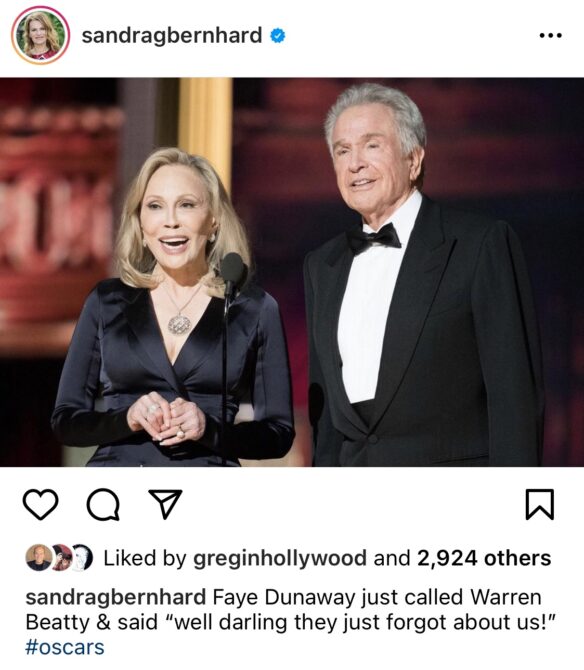 Lil Nas X was as shocked as everyone else.

omg was that real

Randy Rainbow feared for other presenters.

KEEP WILL SMITH THE FUCK AWAY FROM LIZA

George Takei, without naming anyone, reminded folk that celebrities have a responsibility to be good role models.

Many people, especially kids, look up to actors. Because of that, we have an obligation to try to be good role models. With celebrity comes responsibility.

LGBTQ ally Kathy Griffin went viral with a tweet slamming Will Smith: “Let me tell you something, it’s a very bad practice to walk up on stage and physically assault a Comedian. Now we all have to worry about who wants to be the next Will Smith in comedy clubs and theaters.”

Let me tell you something, it’s a very bad practice to walk up on stage and physically assault a Comedian.
Now we all have to worry about who wants to be the next Will Smith in comedy clubs and theaters.

Related: Ariana DeBose, Mitch McConnell and The Power of the Dog: The queerest Oscar moments

The Will Smith-Chris Rock altercation dominated headlines around this year’s Oscars, overshadowing many queer moments. In case you missed them, let’s not forget hosts Wanda Sykes, Amy Schumer and Regina Hall making a joke about Florida’s ‘Don’t Say Gay’ bill.

West Side Story star Ariana DeBose became the first out, LGBTQ woman of color to win an acting Oscar. In her acceptance speech, she told anyone who had ever questioned their identity to never forget, “there is a place for us.”

“So to anybody who has ever questioned your identity [. . . ] or you find yourself living in the grey spaces, I promise you this — there is indeed a place for us.” #Oscars pic.twitter.com/45aORd2Gkk

Jessica Chastain won ‘Best Lead Actress’ for The Eyes of Tammy Faye and also acknowledged anti-LGBTQ legislation being passed in some states at the moment.

Jessica Chastain accepts @TheAcademy for Best Actress for “The Eyes of Tammy Faye” with a nod to anti-LGBTQ+ legislation sweeping the country.#Oscars pic.twitter.com/Vyb7GRNHNJ

Finally, Elliot Page was one of many looking super-dapper at the event.