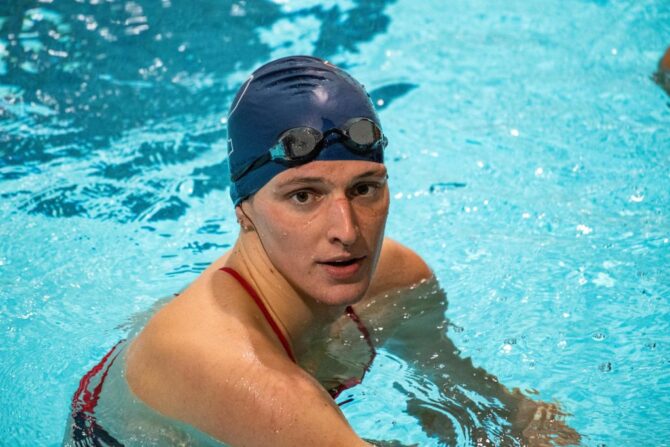 Lia Thomas thought that her decision to come out as transgender and medically transition would end her college swimming career. Instead, she made history this March, when she became the first openly transgender athlete to win a Division I national championship in any sport. That also made the 23-year-old former University of Pennsylvania swimmer a national lightning rod, her triumph stoking the long-smoldering debate surrounding transgender athletes’ participation in sports.

Sports Illustrated called her “a living, breathing, real-time Rorschach test for how society views those who challenge conventions.” The New York Times published a long feature essentially positioning Thomas at the center of the debate over whether trans women pose an existential threat to women’s sports. Martina Navratilova and Caitlyn Jenner have both weighed in. And the commentary on Twitter has been predictably vile.

But through it all, Thomas has remained largely silent. She is not on social media and declined to be interviewed after her history-making win at the NCAA women’s championship in March where, it was reported, she was greeted with noticeably more subdued applause than other swimmers, while outside Save Women’s Sports and Young Women for America protested her participation.

More recently, however, Thomas has been speaking out, and her message is simple: she deserves to be who she is and do what she loves.

In her first on-camera interview, Thomas told Good Morning America’s Juju Chang this week that she was prepared for the scrutiny that would come her way if she decided to compete in women’s swimming. “But I also don’t need anybody’s permission to be myself and to do the sport that I love.”

EXCLUSIVE: "Trans people don't transition for athletics. We transition to be happy and authentic and our true selves."

In response to the absurd suggestion that cis male athletes might choose to compete as transwomen in women’s events as simply to gain an advantage, Thomas had this to say: “Trans people don’t transition for athletics. We transition to be happy and authentic and our true selves. Transitioning to get an advantage is not something that ever factors into our decisions.”

“Trans women are a very small minority of all athletes,” Thomas told ESPN.com recently. “The NCAA rules regarding trans women competing in women’s sports have been around for 10-plus years. And we haven’t seen any massive wave of trans women dominating.”

Both the Times and GMA interviewed experts who insist that trans women will always have a competitive advantage against cisgender women in sports due to having experienced male puberty. But the discussion, so far, has conveniently failed to make the connection between that and widespread efforts in Republican led states to deny transgender kids access to puberty blockers.

For her part, Thomas points to the diversity among cis female bodies, while others have pointed out that the same activist criticizing Thomas have failed to rally around cis women of color who have been shut out of competing in certain events at the 2020 Tokyo Olympics for having naturally high testosterone levels.

TERFs losing their shit about Lia Thomas were conveniently quiet about Christine Mboma and Beatrice Masiling who are cis women who weren’t allowed to compete at the olympics for having naturally higher t levels.

“I just want to show trans kids and younger trans athletes that they’re not alone,” Thomas told Sports Illustrated back in early March before the NCAA Women’s Division I Swimming and Diving Championships. “They don’t have to choose between who they are and the sport they love.”

Having graduated from the University of Pennsylvania, Thomas plans to attend law school in the fall, focusing on civil rights. “Having seen such hateful attacks on trans rights through legislation, fighting for trans rights and trans equality is something that I’ve become much more passionate about and want to pursue,” she told ESPN.com.

But that doesn’t mean she’s done swimming. She revealed in this week’s GMA interview that she has her sights set on the Olympics. “It’s been a goal of mine to swim at Olympic trials for a very long time, and I would love to see that through.”

We’re proud of Thomas not just for what she’s accomplished in her sport, but for showing trans kids and younger trans athletes what’s possible.

love in the family
18

love in the family
18

past is present
29 comments