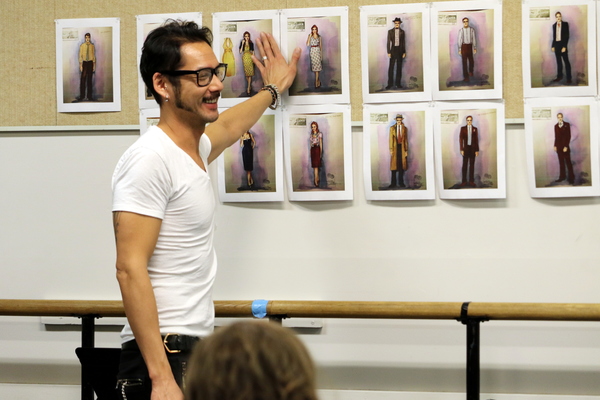 Lex Liang is a costume and set designer based in New York. He recently appeared on Netflix‘s new series Dating Around, a reality show that follows a group of singles around on five separate dates.

In a new interview with TIME, Liang says he never thought, as a gay Asian-American man, he would be cast as the lead on a dating show.

“I thought, you know what? This might be an opportunity to actually find a match,” he says. “I don’t think the gravity of what we’re talking about in terms of representation ever really landed. The whole experience was just sort of an experiment that I thought would be fun to do.”

Fun, sure. But also a lot more work than he expected.

We shot over a week. They wanted me to take the week off, but there was no way I was going to do that—my company was doing a major store renovation in Soho, and I had to meet contractors every day at 8 a.m. So we would shoot for eight to 10 hours, from 7 p.m. to 5 a.m. I would meet somebody for like an hour and we would do drinks and then they would reset. We would go away and take a break or the bartender would bring me another cocktail. I would get home around six. I watched the sun come up every day that week. I would take a nap and then go back to work.

A topic that came up during one of his dates was his race and the fact that he is a “Gaysian.”

“We all know that extreme racism is so rampant in the gay community,” Liang tells TIME. “I can’t tell you how many times on Grindr it’s like, ‘no Asians, no fats, no femmes.’ That is, at its core, racist. But on the flip side, we are a product of how we’re brought up.”

“A lot of that is marketing and a lot of it is just this ingrained racism. So fundamentally, the entire country is underexposed. And so we decide to fetishize the other and appropriate things. And it continues this cycle.”

Related: This model says he was dropped by his agency for being too gay and too Asian

And while Liang says he’s seen strides made by African Americans who are speaking out and getting representation, that isn’t happening as much in the Asian American community.

“Asian people, we like to be the silent culture ninjas,” he says. “We’ll assimilate. We’ll work really hard. I used to be in that boat—no pun intended—and think, “let’s just co-exist. Let’s not cause a ruckus or draw any attention.”

He continues: “But then you say, hold on one second: that’s part of the problem. And the only way this is going to change is if you have an Asian leading man in a major Hollywood release, with Julia Roberts falling in love with him. That’s the only way that Pennsylvania to Nevada, and Montana to Texas, is going to be like, “Oh. So they’re not just the nerdy best friend? They’re not just the accountant?”

Watch the trailer for Dating Around below.