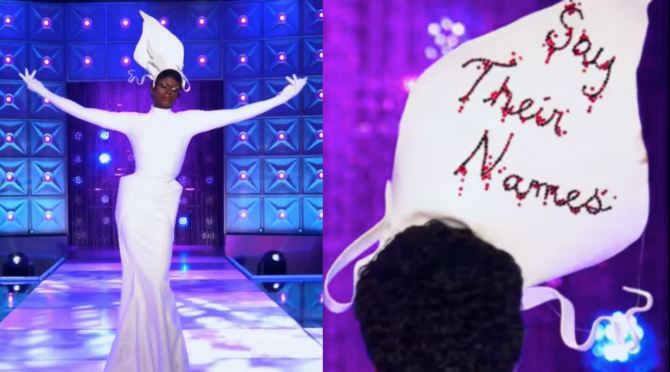 With bars and community spaces closed for much of 2020, Reggie Gavin, better know as Symone, helped countless LGBTQ folks feel connected by popping up on televisions each week on RuPaul’s Drag Race season 13.

For many, that weekly dose of drag was a real lifeline, and Symone gave us life and then some–so much so that she took home the crown and the title of America’s next drag superstar.

To have kept us gagging throughout a pandemic is a feat in and of itself, but Symone did even more than that when she took a “Fascinating Fascinators” runway challenge in episode nine and gave an ode to the Black Lives Matter movement.

Following the Snatch Game where she delivered an unexpected and exciting interpretation of Harriet Tubman, Symone worked the runway in a white gown and a lily attached to her head. When she turned around she revealed two red, stylized bullet holes on her back and the words “Say Their Names” written on her headpiece.

She made the @RuPaulsDragRace runway her stage while affirming #BlackLivesMatter and #BlackTransLivesMatter.

“I really wanted to take this opportunity to do some activism in my drag and personify that Black angelic being,” she added off-camera.

“I thought that, especially with the times we were in, whenever this airs, I don’t want people to forget, and I want to make a statement,” Symone later told Entertainment Weekly. “I wanted to do it in a way that was still in-your-face, but artistically.”

Woking with designer Marko Monroe, a fellow member of the House of Avalon, the tight-knit group of artists and performers born in Arkansas and currently residing in Los Angeles, Symone spoke perfectly to the moment.

“[It shows] that Black is beautiful, but that there are so many things that are put upon us that are negative. I wanted to show that beauty that is part of my community, and I wanted people to understand that we’re people, too,” she added.

Drag has always been political, but it’s never been as broadly popular as it is now. As it finds an ever-expanding mainstream audience, it’s a joy to see a young, vivacious queen like Symone using her platform to get serious.

Or as she said during her winning speech, “I told y’all not to let the smooth taste fool you!”