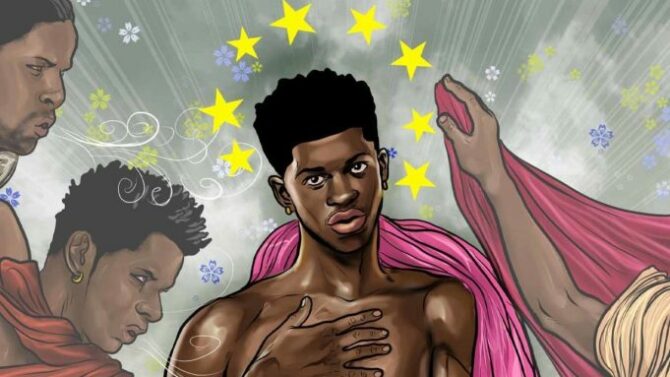 Grammy-winning singer and 2022 Queerties nominee Lil Nas X has yet another achievement to add to his resume: comic book hero. The singer will star in his own edition of the comic book Fame, which will chronicle his rise to success.

The latest issue of the long-running title, written by Darren G. Davis and illustrated by Victor Moura, will tell the story of Lil Nas X, born Montero Hill, from his days as a child living in Atlanta to becoming an openly gay superstar. The book will also chronicle the struggles with homophobia he experienced growing up and entering the music industry. Lil Nas X came out in 2019 following the success of his hit song “Old Town Road.”

The Hill further reports that the illustrations in the book will take a cue from Lil Nas X’s iconic videos and album covers, using similar color schemes and designs.

“[I] tried my best to make the art of this book unique so it had its own voice like it should,” illustrator Moura said of the book.

Lil Nas X joins the ranks of other famous musicians to get their own issue of Fame, including Madonna, David Bowie, Beyonce, Tina Turner, and Lady Gaga. The book is currently on sale at Amazon and other retailers.

Since arriving onto the music scene with “Old Town Road,” Lil Nas X has enjoyed the spotlight as one of music’s hottest performers. The release of his album Montero last year earned rave reviews from critics, landed at #2 on the Billboard charts, and scored five Grammy nominations, including nods for Record of the Year and Album of the Year.