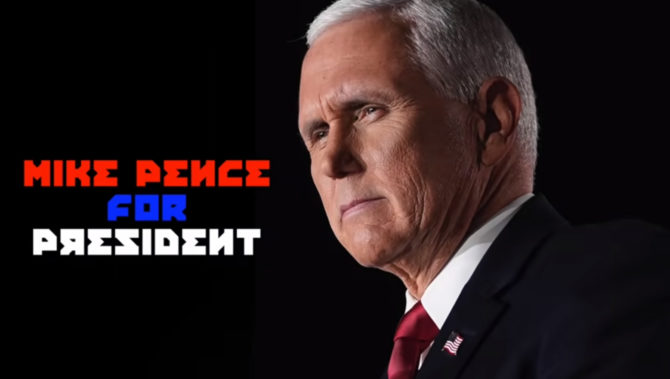 Showing off the group’s sarcastic sense of humor, grassroots anti-Trump Republican group The Lincoln Project has released a new “Mike Pence for President” ad. Though ostensibly pro-Pence, the video actually tears into the Vice President for his inaction and enabling of Donald Trump.

“A triumphant leader has emerged to take the MAGA movement into the future,” the announcer says. “Mike Pence. ”

“While the divisiveness in this country has reached violent and frightening proportions,” the ad goes on, “Mike Pence has proven that sometimes doing nothing is the most courageous act of all. And no one has done nothing more than Mike Pence…hasn’t.”

“Other Republicans abandoned the president while yet more continue to support him,” the ad continues. “But Mike Pence, using his decades of experience, knew that the best thing to do was nothing at all.”

The video goes on to indict Pence on his unwavering support of Trump, even flying in the face of reality. This year alone Pence has repeated false claims that the 2020 Election was rigged or “stolen” from Trump, made false statements about the ongoing COVID-19 pandemic, and declined to use the 25th Amendment to remove Trump from office following the Jan. 6 Capitol riots sparked by the President.

“In fact, he’s totally giving Trump the silent treatment,” the ad concludes. “He’s speaking less to Trump than he would to a female subordinate at a lunch meeting.”

That last statement is a reference to multiple reports that Trump and Pence are not on speaking terms following Pence’s overseeing of the certification of the 2020 Election results. Trump had urged Pence to deny or overturn the results acting as President Pro Temp of the Senate, something Pence did not have the power to do.

Pence’s support of Trump following the Capitol attack is all the more shocking considering that the attackers had broken into the building shouting “Hang Mike Pence” with the intention of murdering the Vice President. Washington insiders say that Pence has planned to leave Washington immediately after Joe Biden is sworn in as President January 20.