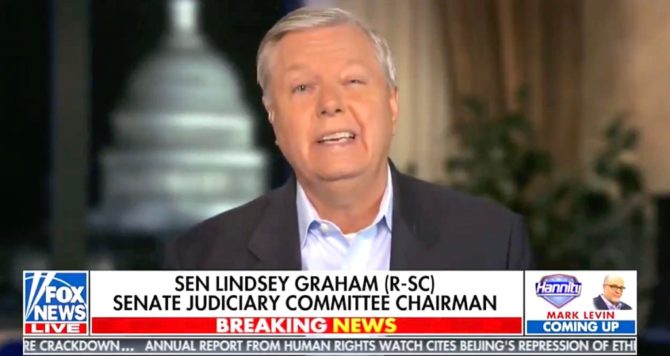 Just hours after the House of Representatives voted to impeach Donald Trump for a second time, South Carolina Republican Senator Lindsay Graham took to Fox News to denounce the proceedings.

Graham, who had initially raged against the Jan. 6 Capitol insurrection which sent him, along with his fellow elected officials fleeing from the Senate chamber, changed his tune in an interview with Sean Hannity. Graham proceeded to argue that impeaching Trump after he left office was a “slippery slope” that could lead to impeaching past, even dead, Presidents.

“We impeached the president today without any evidence,” Graham said. “It’s just sheer hatred. If this becomes the norm, be careful what you wish for today. Under this theory the radical left if you can impeach a president after they’re out of office, why don’t we impeach George Washington? He owned slaves. Where does this stop?!”

Graham had initially denounced the Capitol attack, labeling the perpetrators terrorists and seditionists. His recent statement comes just days after his Senate colleague, Sherrod Brown, reported that he witnessed Graham screaming at Capitol security during the attack.

“Lindsey Graham, with his mask off, started screaming at one of the officers — I think it was one of the captains — saying, ‘How come you didn’t protect us? It’s your job,'” Brown recalled, according to Business Insider.

Lindsay Graham has been one of the most ardent defenders of Donald Trump over the past four years. Nevertheless, following Graham’s denunciation of the Capitol violence, video circulated of the senator at the Reagan International Airport in Washington getting heckled by Trump supporters. In the footage, Graham walks flanked by security, his head hanging low, his mask removed, amid chants of “traitor.” Graham is also embattled in an election scandal, following reports that he lobbied election officials in several states to alter or overturn the results of the 2020 Election to favor Donald Trump.

how dare she
28 comments

how dare she
28 comments