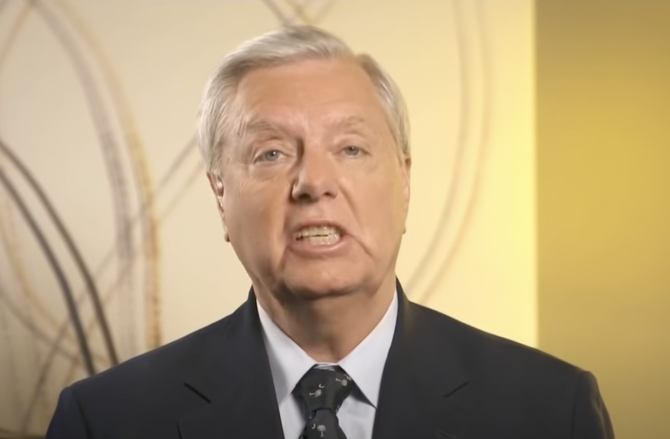 There he goes again. Sen. Lindsey Graham is acting all dramatic again.

After throwing President Biden under the bus after a decades-long close friendship, and then groveling for months and months and months after Biden was elected POTUS, the antigay senator from South Carolina is once again attacking his former BFF.

Yesterday, Graham went on Fox News to bitch about how he’ll “never forgive” Biden for the withdrawal of American troops from Afghanistan… which was initiated by ex-president Donald Trump.

“I’ve known Joe Biden for a long time,” Graham said on America’s Newsroom yesterday morning. “I had a good personal relationship with him. He’s a decent man, but what he did in Afghanistan, I will never forgive him for.”

Hmmm. Not forgiving someone doesn’t seem like very Christ-like behavior for a guy who purports to be a Southern Baptist. But we digress.

The distraught homophobe continued, “He has blood on his hands, and he’s made America less safe. And he’s been the most consistently wrong man on foreign policy in my lifetime.”

Because that wasn’t dramatic enough, Graham went on to say that he believes the United States will now be the target of another 9/11-like attack, though he didn’t actually cite any specific intelligence to back up his outrageous, unsubstantiated claim.

Graham has sure come a long way from that sentimental car ride he took back in 2016 when he got all teary eyed talking about his old friend Joe, saying, “The bottom line is, if you can’t admire Joe Biden as a person, then it’s probably–you’ve got a problem. You need to do some self-evaluation. ‘Because what’s not to like?”

Graham went on to describe Biden as “the nicest person I think I’ve ever met in politics” and saying he is “as good a man as God ever created.”

Lindsey Graham says that he’ll never forgive Biden for how he handled the Afghanistan withdrawal…but being as he made a full 180 on Trump, we’ll see how that turns out.

Lindsey Graham announces that he's no longer friends with Biden after Biden spent the last 10 months ignoring his calls.

Lindsey Graham’s long-deteriorating behavior has gone into freefall this week. Why? Fulton County DA is empaneling a special grand jury to speed up her Trump election tampering probe. Graham is a target of this probe, and this latest news clearly has him afraid he’ll be indicted.

Lindsey Graham forgave Donald Trump for inciting an insurrection where he could have been killed but he won’t forgive Biden for the Afghanistan withdrawal. Yes he’s a shameless piece of shit who’s words are meaningless.

It’s cute Lindsey thinks he did the breaking up 😂😂

Every white person has an aunt who looks like Lindsey Graham

This is your daily reminder that Lindsey Graham has no friends.

I will never forgive @LindseyGrahamSC for being Lindsey Graham.