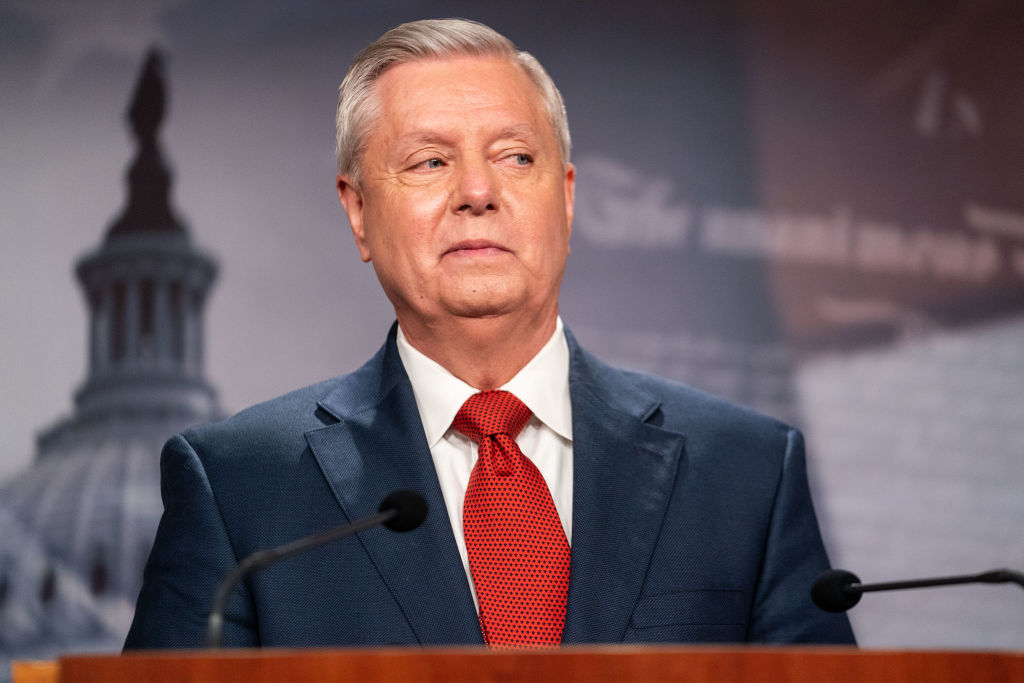 People have long speculated that Donald Trump is blackmailing Lindsey Graham, and that’s why the antigay senator from South Carolina has been such a loyal lapdog to him. While there’s no evidence to support the rumors, they’ve continued to swirl for years. And they just got kicked up about five notches by Steve Bannon.

Related: Lindsey Graham is being a total drama queen again

In a recent episode of his War Room podcast, Bannon railed against Graham, calling him a “scumbag” and a “slimeball” for allegedly turning his back on Trump.

Bannon was responding to remarks President Biden made when he said there are five Republican senators who privately told him they want to support his agenda but can’t do so out of fear of being primaried by pro-Trump candidates.

Graham has blasted Biden repeatedly during the first year of his presidency. He said he would “never forgive” the president for withdrawing U.S. forces from Afghanistan during a Fox News interview last November, maintaining that he believed Biden had “blood on his hands.” His assessment of Biden was far different in a 2015 Huffington Post interview.

“The bottom line is if you can’t admire Joe Biden as a person, you’ve got a problem, you need to do some self-evaluation,” a teary eyed Graham said during the 2015 interview. “What’s not to like? … He’s the nicest person I think I’ve ever met in politics. He is as good a man as God ever created.”

Graham’s statements on Trump have also wildly differed over the years. Although he relented on Trump’s efforts to overturn the 2020 election results after the January 6 attack on the Capitol last year, he said that the Republican Party would not be able to “move forward without President Trump” during a May 2021 interview with Fox News Host Sean Hannity.

Bannon is known for playing dirty–very dirty–against people he doesn’t like. In 2020, for example, he was linked to the Chinese website that published x-rated photos of Hunter Biden. If the blackmail rumors about Graham are true, and if Graham has, in fact, turned on Trump as Bannon suggested, then we suspect things in MAGA land are about to get very ugly very fast.

Steve Bannon just called Lindsey Graham "scum" and a "slimeball" for being "a traitor to Trump." Which is strange, since Lindsey and Bannon were once very close, as seen here last weekend at Mar-a-Lago pic.twitter.com/vzVodRllpY

Headlines:
"Steve Bannon rails against 'scumbag' Lindsey Graham for supposedly being secret MAGA 'traitor'"
When rats run out of food they'll turn on themselves..

I’ve suspected blackmail has been part of Trump and his allies mode of operation. How else do you explain Lindsey Graham?

Stock up on popcorn now. It's gonna get good!https://t.co/M18oCzoNHP

As the J6 committee gets closer and closer to the truth about the attempted coup MAGA world is eating its own. Today Steve Bannon called Lindsey Graham a traitor and a scumbag. And now I feel compelled to actually agree with Bannon on something. I don't even know who I am anymore

Steve Bannon is a disgusting puke, and Lindsey Graham is an ugly old woman.

For Steve Bannon to come out and attack Lindsey Graham on his podcast as one of the 5 republicans who support Biden, tells me that Bannon is aware of what Lindsey is being blackmailed with by Trump, and reminding him he better stay in linehttps://t.co/XuVEIGFcrJ