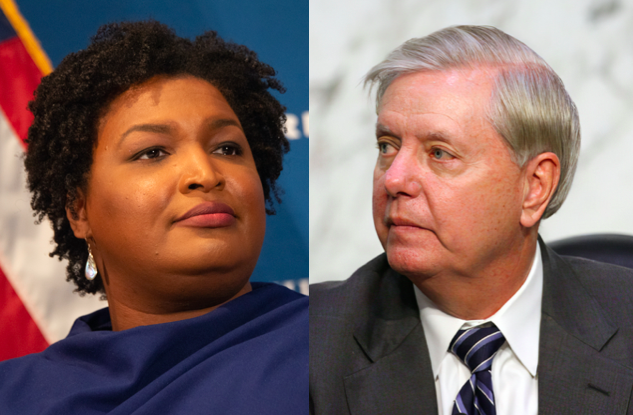 Appearing on the rightwing syndicated radio program The Mike Gallagher Show, Graham called Abrams a con and a thief because she was successful at turning out new voters in Georgia, resulting in Biden becoming the first Democratic presidential candidate to win the state in 28 years.

“Stacey Abrams conned the Republican leadership in Georgia into a consent decree that basically adulterated the signature verification system, so that you’re comparing the ballot signature to the application signature,” Graham raged.

Hmmm. A crusty old white dude calling a smart Black woman a “con” for being better than him at her job. Sounds like some racially coded B.S., if you ask us.

Graham continued by saying Abrams essentially orchestrated a massive voter fraud scheme in the Peach State by changing the rules about voters’ signatures.

“You should be comparing the ballot signature, the envelope signature on the ballot, to a signature that existed before the application was made,” he said. “She changed that.”

This, of course, is totally false.

The AP reports that no such consent degree preventing Georgia clerks from scrutinizing signatures exists. And election officials in Georgia have said multiple times now that the election outcome was fair and accurate, as shown by multiple recounts.

Graham went on to implore GOP leaders in the state to quickly change the laws so they can “stop Stacey Abrams from stealing the Senate race,” referring to the two Senate runoffs scheduled for January 5 that will likely determine the balance of power in Congress.