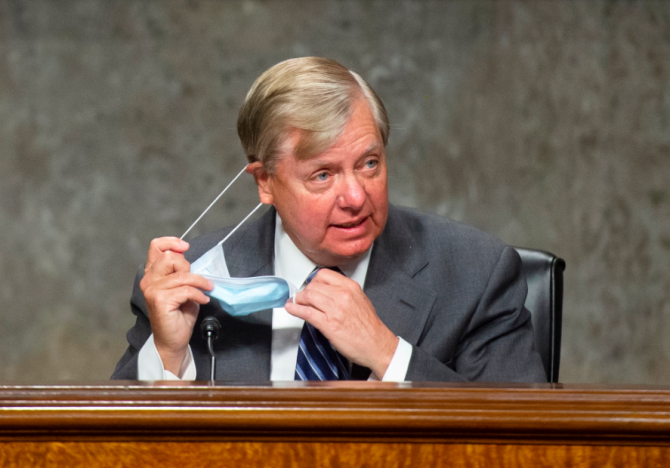 Lindsey Graham took a brief (very brief) pause from kissing Donald Trump‘s ass this morning to push back against a racist conspiracy theory the Birther-in-Chief peddled yesterday about how Kamala Harris might not be a legitimate U.S. citizen.

Related: Um, Herman Cain died two weeks ago… so why is he bashing Kamala Harris on Twitter?

It all started at a press conference yesterday, when Trump told reporters, “I heard today that she doesn’t meet the requirements. I have no idea if that’s right. I would have assumed the Democrats would have checked that out before she gets chosen to run for vice president.”

President Trump on claims that :Kamala Harris isn't eligible to run for Vice President because she's an anchor baby: "I heard it today that she doesn't meet the requirements…I have no idea if that's right. I would have assumed the Democrats would have checked that out." pic.twitter.com/H887X43GJK

Harris was born in California to parents of Jamaican and Indian origin. She has been an U.S. citizen her entire life. Many, including Fox News and now Lindsey Graham, were quick to point out this absolutely indisputable fact.

This morning, Graham tweeted: “There are plenty of issues to find disagreement with @KamalaHarris regarding her record as Senator or as a Vice Presidential nominee. She is consistently rated one of the most liberal members of the U.S. Senate, fully embracing a radical Democratic agenda.”

He immediately followed that up with a second tweet that said, “However, there is no issue as to whether or not she is an American citizen. She was born in the United States in 1964 to parents who were legally present. Under the Constitution and Supreme Court precedent, she is unequivocally an American citizen.”

However, there is no issue as to whether or not she is an American citizen.

She was born in the United States in 1964 to parents who were legally present.

Under the Constitution and Supreme Court precedent, she is unequivocally an American citizen.

Shortly after Trump made the racist insinuations, the Biden campaign put out a statement saying:

Donald Trump was the national leader of the grotesque, racist birther movement with respect to President Obama and has sought to fuel racism and tear our nation apart on every single day of his presidency. So it’s unsurprising, but no less abhorrent, that as Trump makes a fool of himself straining to distract the American people from the horrific toll of his failed coronavirus response that his campaign and their allies would resort to wretched, demonstrably false lies in their pathetic desperation.

In other Lindsey Graham news, the South Carolina senator is currently in the middle of what has become the toughest re-election campaign of his career.

Real Clear Politics recently declared Graham’s race against Jaime Harrison, the first Black chair of the South Carolina Democratic Party, a “toss-up” as the two candidates are currently tied in the polls. In the past, Graham has always led his Democratic opponents by double digits.

South Carolina hasn’t elected a Democrat in any statewide election in nearly 15 years. That may very well change come November.