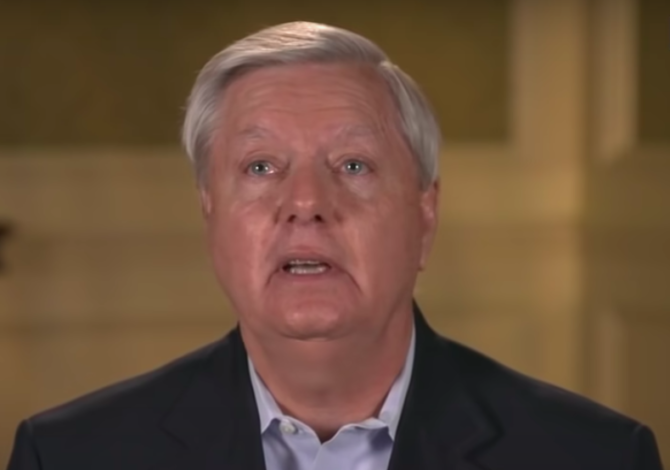 As lawmakers were being evacuated out of the U.S. Capitol building during the January 6 insurrection, Sen. Lindsey Graham was reportedly having an absolute meltdown, screaming for his life and demanding the the Senate sergeant-at-arms to use guns to shoot the rioters.

A new report by The Washington Post says the antigay senator was a total mess during the deadly siege, yelling at the Senate sergeant-at-arms, “What are you doing?! Take back the Senate! You’ve got guns! USE THEM!!!”

According to the report, Graham also called Ivanka Trump‘s personal cellphone to demand she get her dad to call off the attack and offer suggestions for what he might say to quell the MAGA militia.

“You need to get these people out of here,” Graham reportedly begged Ivanka Trump over the phone. “This thing is going south. This is not good! You’re going to have to tell these people to stand down! STAND DOWN!”

This new report squares with what Sen. Sherrod Brown said back in January, when he said Graham “screamed” during the insurrection, accusing a Capitol Police officer of not doing “enough” to protect him as the building was being stormed.

“I heard when the 75 senators were confined in a room with about 75 staff people, Lindsey Graham with his mask off started screaming at one of the officers,” Brown recalled to MSNBC’s Ari Melber. “I think it was one of the captains, saying, ‘How come you didn’t protect us? It’s doing your job!’”

“He was screaming at an officer. He had his mask off screaming at this officer from 5 feet away–I was maybe 10 feet on the other side–that the officer, the police, didn’t do enough to protect us.”

WATCH: @SenSherrodBrown reports publicly for the first time that during the attack on the Capitol he saw a maskless Sen. Graham scream at a Capitol police officer for not “doing enough” to protect the Senators pic.twitter.com/LKkfIkmfiH

When asked for comment on the Washington Post article, a spokesperson for Graham’s office said the story was “nothing new,” pointing to similar statements the antigay senator made in the days following the attack.

At the time, Graham criticized the security failures that took place that day, telling reporters he was “embarrassed” and “disgusted” Trump’s militia was able to breach the building so easily and cause such extensive damage, which included smashing windows and defecating all over the floors.

“Those who made this attack on our government need to be identified and prosecuted to the fullest extent of the law,” Graham tweeted on January 6 amidst the attack. “Their actions are repugnant to democracy.”

Those who made this attack on our government need to be identified and prosecuted to the fullest extent of the law.

Their actions are repugnant to democracy.