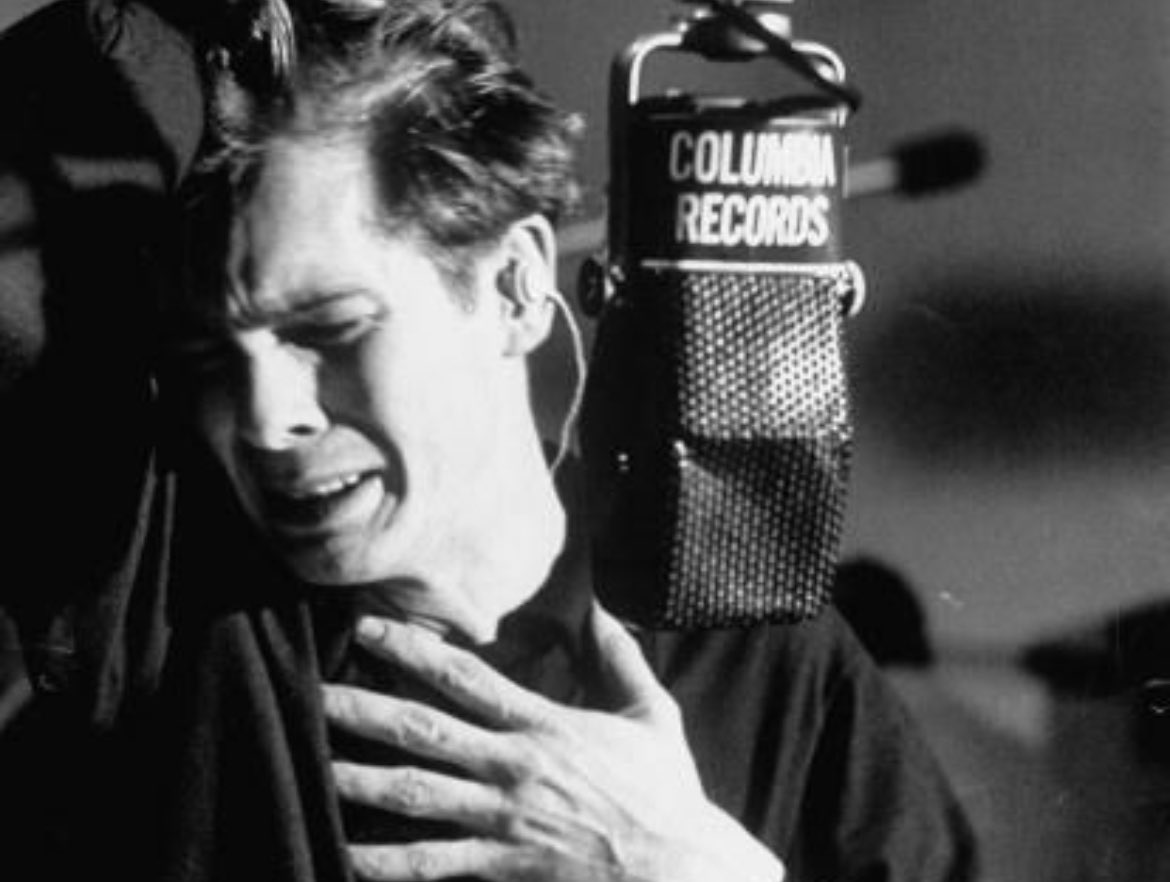 He recorded over two dozen Top 40 hits. He appeared on programs from What’s My Line to The Ed Sullivan Show. He’s name-dropped in the first line of “Come On, Eileen” AND “We Didn’t Start the Fire.” Yet, when folks list queer music stars, Johnnie Ray’s name is liable not to come up among the Bowies and Mercurys of memory at all.

That may be because, like many figures like him in the ’50s, Ray didn’t openly identity as queer. That said, it was specifically his unmasculine manner of performance that seemed to make him the figure that he was, even in the midst of Lavender Scare America.

He sang with a melancholy that was heavily inspired by the blues and jazz acts that preceded him, as well as presumably by a natural well of emotion all his own.

This feeling shown through in his debut 1951 single, a rendition of the Churchill Kohlman tune “Cry.” It shot to the top of the Billboard Hot 100 and stayed at number one for eleven weeks. Even its B-side, “The Little White Cloud That Cried,”made its way to number two.

His emotion was not relegated solely to his song titles; Ray would often break down in tears during his performances in evocative, sometimes raucous displays that drove crowds wild. A writer for Billboard referred to a show of his as “a masterful display of showmanship that evoked mass hysteria resembling a Holy Roller meeting.”

A particularly tear-inducing track is his rendition of The Four J’s “(Here Am I) Broken Hearted.” The lyrics tell of the singer’s “old gal” and “old pal” getting together, with the singer losing both connections in the process. In contrast to the easy doo-wop of the original, Ray wails out the bridge of “it’s bad enough that I lost her/I had to lose him too” at a fever pitch.

Ray’s sexuality is well-documented in its own way, most concretely through a couple of publicly-known arrests he racked up trying to pick up male undercover cops in bars. Between those, his general disposition, and posthumous testimony from several friends in a biography, little doubt exists that he was a friend of Dorothy. It’s barely even euphemistic, as he was actually the Best Man in Judy Garland‘s last wedding.

Ray isn’t forgotten by any means; Bob Dylan has cited him as “the first singer whose voice and style I totally fell in love with,” and Tony Bennett has referred to him as the “father of Rock & Roll”. His legacy is cemented in the archives of queer music history — or Spotify, whichever you prefer.

Hear Ray bemoan his loss as only he can in “(Here Am I) Broken Hearted”: