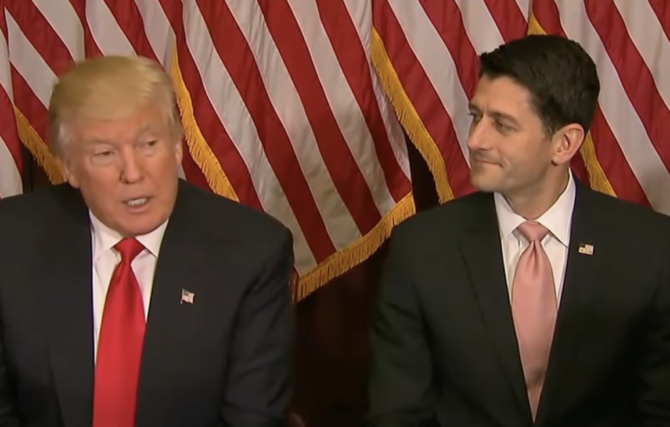 Paul Ryan has kept a relatively low profile since quitting Congress in 2019 to join the board of directors of Fox Corporation, where he reportedly earns an annual salary of almost $350,000.

But in journalist Mark Leibovich’s new book Thank You for Your Servitude, the former Speaker of the House is trying to rebrand himself from the Donald Trump sycophant/slimeball/opportunist we all know him as into a proud American patriot who watched in horror as the MAGA militia stormed the U.S. Capitol on January 6, 2021.

I'll be voting for @realDonaldTrump this fall. I'm confident he will help turn the House GOP's agenda into laws. https://t.co/LyaT16khJw

Ryan, who endorsed Trump in both 2016 and 2020, told Leibovich he’s not much of a crier, but “something snapped” in him as he watched the violent insurrection on TV and he “found himself sobbing” at the deadly chaos unfolding on his old stomping ground.

“I spent my whole adult life in that building,” the ex-congressman said. “And I saw my friends, a lot of cops, some of my old security detail—I’m still friends with a bunch of those guys. It really disturbed me, foundationally.”

“Ryan figured the president would bitch and moan and maybe make a big show of ‘fighting’ for his supporters for a while,” Leibovich writes. “Everyone could feel good and victimized. But eventually Trump would just leave; hopefully, he would know to do this on his own. And everyone could then just get on with their lives.”

But if Ryan thought his interview with Leibovich would repair the damage done to his reputation by all those years he spent enabling and defending Trump, he can think again. Literally nobody is buying it.

Let’s be abundantly clear about this: if Paul Ryan were so affected by the Jan. 6th attack—crying, he claims, no less—he’d be doing everything he can to hold accountable those behind it.

But he’s not. Because Paul Ryan has only ever cared about Paul Ryan. Stop listening to him.

So, I just read that Paul Ryan "sobbed" in front of the TV on J6.

Really? Does anyone think tfg worked in a vacuum? Everything that happened, happened because nimrod traitors like Paul Ryan enabled him.

He sobbed? Whatever. He's complicit.

So please stop with your fake ass tears

I hear Paul Ryan also peed himself on Jan 6 and then didn’t even change clothes before Fox’s next board meeting.

Not so into the armed insurrection but sort of into Paul Ryan crying.

Paul Ryan can fuck all the way off.

It’s because of greedy pathetic bootlicking cowards like him that Donald Trump got elected in the first place.

He knew Trump was an unqualified fascist moron, but he kept his mouth shut and toed the line to get his judges & tax cuts.

Paul Ryan and Brett Kavanaugh should have a cry-off to decide, once and for all, which of them is the more cowardly piece of shit.

I don't give a fuck if Paul Ryan was "sobbing" when he watched the Jan 6th insurrection. He did absolutely nothing when he could have. He sat quietly as the flames grew.

Paul Ryan was sobbing? The way he was sobbing when he used survivor benefits to get through college and then wanted to gut the safety net for others as they sobbed?

Paul Ryan was so upset on January 6th his tears almost smeared Rupert Murdoch's signature on the former Speaker's paycheck from Fox News.

BREAKING: Paul Ryan says he sobbed while watching the January 6th insurrection on TV, but then consoled himself remembering how he had done literally everything within his power, influence, and energy to prevent Trump's damage to our democracy.

During his 20 years in Congress, in addition to constantly kissing Trump’s ass, Ryan supported job discrimination based on sexual orientation and a constitutional ban on same-sex marriage, he also opposed gay adoption and the repeal of Don’t Ask Don’t Tell.

Related: Paul Ryan Is No Friend to LGBTQ People