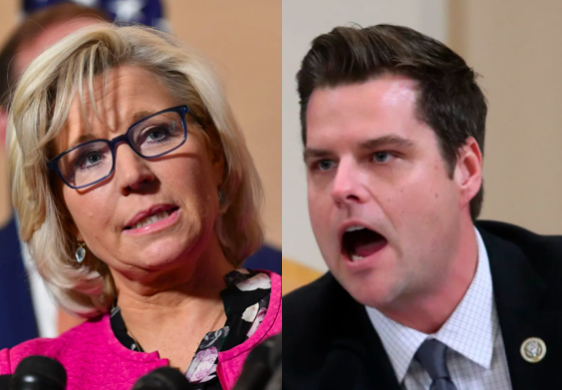 Antigay Rep. Liz Cheney of Wyoming and antigay Rep. Matt Gaetz of Florida have been at each other’s throats for the past week after she voted to impeach former President Donald Trump in the House of Representatives.

Gaetz was so offended by Cheney’s vote that he called on her step down as House Republican Conference chair then announced plans to visit her home state for an event happening at the Wyoming State Capitol later today.

Upon learning of Gaetz’s plans to come to Wyoming, a spokesperson for Cheney’s office put out a statement making a homophobic jab at the 38-year-old lawmaker, saying, “Rep. Gaetz can leave his beauty bag at home. In Wyoming, the men don’t wear make-up.”

We would expect nothing less from a woman who, despite having a lesbian sister, still opposes marriage equality and holds a score of “0” on HRC’s Congressional Scorecard.

Gaetz, who identifies as straight and is engaged to a woman, has long been the subject of gay rumors. He, too, holds a score of “0” on HRC’s Congressional Scorecard.

Since supporting Trump’s second impeachment, Cheney has faced backlash from her constituents, 70% of whom voted for Trump in 2020. She already has a 2022 primary challenger, and over 50,000 people have signed a Change.org petition to “recall” her.

As for Gaetz, he said on Twitter last weekend that he’s not eyeing Cheney’s job, nor is he “seeking a position in House Leadership,” but he thinks “Wyoming can do better.”

If you ask us, the entire country can do better than these two clowns.