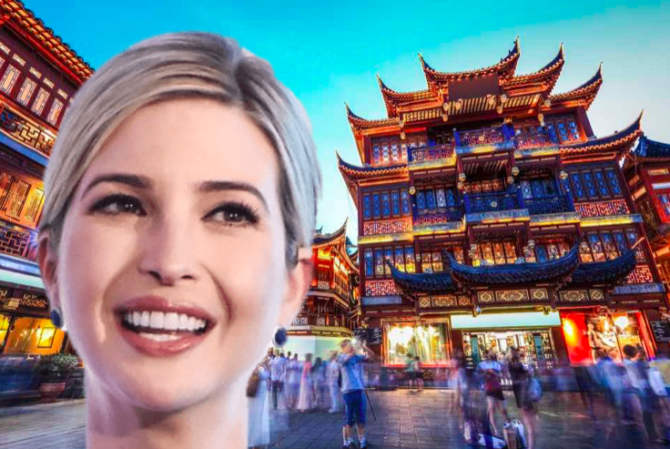 She may be controversial in her home country, but Ivanka Trump is huge in China. In fact, Donald Trump’s second-oldest child is quickly becoming a cult figure in the communist country. She even has her own online fan club dedicated to the “Goddess Ivanka.”

“Most people in China love Ivanka because of her friendly gestures towards the Chinese people,” blogger and Beijing Institute of Technology economics professor Hu Xingdou tells NBC.

But the praise doesn’t stop there.

“She is very amiable, with a tender disposition,” Geng Baoqiang, a senior manager at a foreign investment company remarks. “Not like her father who is quite unpredictable.”

“She’s independent-minded, thoughtful, and supportive of her dad,” Jenny Zhen, a Chinese language teacher, adds. “Her kids learning Chinese language will definitely have a good influence on China-U.S. relations.”

“She is the image ambassador of the White House,” says Chen Pei, a student at Beijing Foreign Studies University.

Related: Ivanka Trump used a state dinner at Mar-a-Lago to make some serious coin in China

So much so that fans have started banding together on the social media platform Sina Weibo, China’s version of Facebook, where they have created multiple accounts in her honor. The group “Goddess Ivanka” has over 12,700 followers. Other popular accounts include “Ivanka Trump Fan Page” and “Ivanka Trump China.”

The media has also been doting on her, frequently describing her as “capable and stylish” and “elegant and sociable” in newspapers.

And don’t think for a second that Ivanka isn’t taking advantage of her newfound celebrity.

The first daughter currently has 16 registered trademarks in China, and more than 30 pending applications, which she applied for to stop hundreds of copycat Chinese companies from cashing in on her name. The “Ivanka Trump” brand has been slapped on everything from tacky jewelry, to underwear, to mattresses, to formula milk powder. Rumor has it she’s also planning on opening some sort of Ivanka Trump spa service.

Hu says the Trump family’s interest in China has been a great “boost for Chinese cultural nationalism.”

“It shows that Chinese culture has an important place in international society,” he says. “Ivanka is an important bridge during this period of uncertainties in China-U.S. relations.”

Norman Eisen, a former ethics lawyer who served under Barack Obama, recently told The Boston Globe that if Ivanka really is the civil servant she claims to be, she should cut business ties with China immediately.

“Ivanka has so many China ties and conflicts, yet she and Jared appear deeply involved in China contacts and policy,” Eisen said. “I would never have allowed it. For their own sake, and the country’s, Ivanka and Jared should consider stepping away from China matters.”

Related: Ivanka Trump wanted to interview this queer chef — and her rejection letter is utterly brutal