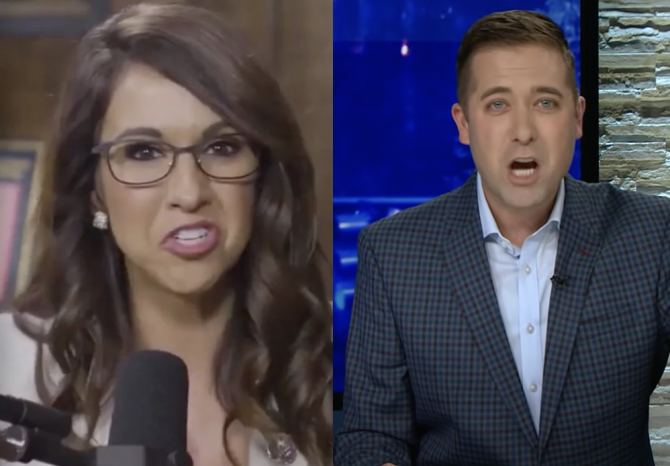 A local Colorado news anchor has officially had it with Rep. Lauren Boebert.

Kyle Clark anchors for 9NEWs in Denver and is also the host of “Next with Kyle Clark.” He’s a well-liked, well-respected, Emmy-award winning journalist. He’s also D-O-N-E done with Boebert.

Last night, Clark tore into the racist, homophobic QAnon congresswoman for “the cruel, false, and bigoted things she says for attention and fundraising.”

Related: Lauren Boebert is having an absolute panic attack over gender inclusive language

He was responding specifically to Boebert’s disgusting Islamophobic attack on Rep. Ilhan Omar on the House floor this week, during which she accused her colleague of being a terrorist and member of the “jihad squad” and peddled untrue rumors that she was married to her brother.

“We hold Congresswoman Boebert to a far lower standard,” Clark said. “If we held her to the same standard as every other elected Republican and Democrat in Colorado, we would be here near-nightly chronicling the cruel, false and bigoted things that Boebert says for attention and fundraising.”

He added: “This is not about politics–assuming politics is still about things like taxes, national security, health care, jobs and public lands. This is about us, as journalists, recognizing that we’ll hold a politician accountable if they say something vile once, but we won’t do it if they do it every day.”

Omar responded to Boebert’s remarks in a tweet, writing: “Luckily my dad raised me right, otherwise I might have gone to the floor to talk about this insurrectionist who sleeps with a pervert. I am grateful I was raised to be a decent human and not a deprived person who shamefully defecates & defiles the House of Representatives. “

Luckily my dad raised me right, otherwise I might have gone to the floor to talk about this insurrectionist who sleeps with a pervert. I am grateful I was raised to be a decent human and not a deprived person who shamefully defecates & defiles the House of Representatives. ?? God https://t.co/F5W9LBzjCZ

Omar appears to be referencing the 2004 case involving Boebert’s then boyfriend/now husband, Jayson, who was arrested for exposing himself to a group of women, including a 16-year-old girl, at a bowling alley.

Jayson told police he “displayed his thumb pretending it was his genitals in a gesture of fun,” but witnesses disputed his account and said it was definitely his penis because “thumbs aren’t 6 inches long.”

According to the New York Post, Jayson later pled guilty to public indecency and lewd exposure and was sentenced to four days in jail plus two years probation.