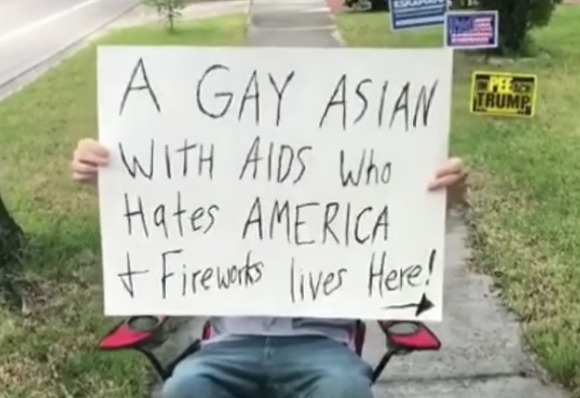 Some dude in Orlando was caught on video parked on the sidewalk outside his neighbor’s house waving a homemade sign that read: “A gay Asian with AIDS who hates America and fireworks lives here!”

On the other side of the sign was another message: “A butt hurt Trump hater lives here, who’s the keyboard warrior now?”

The video was posted to Facebook earlier in the week and has since gone viral.

A Trump Deplorable caught on video harassing an anti-Trump protester outside his home with a homophobic sign:

The guy in the video has been identified as Matt Sherman, a grown man and outspoken Trump supporter who purportedly still lives with his parents and is clearly very homophobic and racist.

It’s not totally clear what inspired Sherman to picket in front of his neighbor’s home, but Orlando Weekly reports it may have started with argument on the NextDoor app.

Orlando Weekly also notes that it’s illegal in the City of Orlando to directly target someone by picketing their residence.

According to ordinance 43.42, it is “unlawful for people to picket before or about the residence or dwelling of any person … This section shall not apply to a person peacefully picketing upon property which he owns or which he is lessee or peaceful picketing within a place commonly used for public assembly.”

But when has a Trump supporter ever been concerned about following the law?