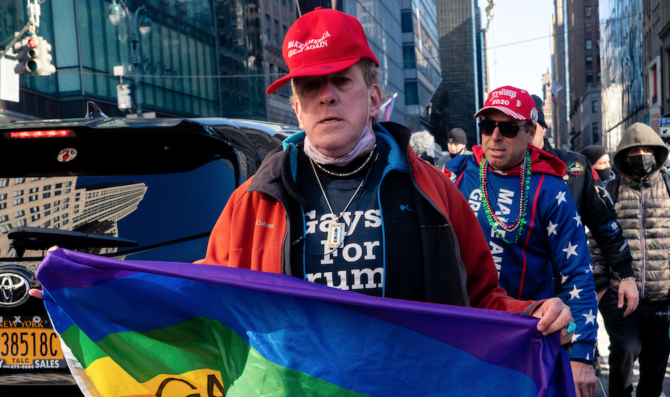 Following the FBI’s raid of Mar-a-Lago, the favorite right-wing response has been to wail that the agency has become “weaponized” against Donald Trump. No matter that crimes may have been committed and it’s their job to investigate.

But nope, the gay conservative group really did have the audacity to compare themselves to Stonewall rioters as they continued to suck up to Trump.

“Just as the patrons of Stonewall were not intimidated by police, we will not be intimidated by the weaponization of the FBI and DoJ against President Trump or his home, Mar-A-Lago… …where (as we announced hours ago) we will be holding our annual gala later this year!” the group tweeted.

Just as the patrons of Stonewall were not intimidated by police, we will not be intimidated by the weaponization of the FBI and DoJ against President Trump or his home, Mar-A-Lago…

…where (as we announced hours ago) we will be holding our annual gala later this year! ?

As one commenter pointed out, “The patrons at Stonewall were largely Black and Latinx. Marsha P Johnson didn’t risk everything for you to join up with a party that runs on racism and transphobia. They are never gonna view you as equals. Use your energy elsewhere.”

Indeed, the group has repeatedly been denied a booth at the Texas GOP convention, where their own party states that “homosexuality is an abnormal lifestyle choice” in its official platform.

The Log Cabin Republicans previously held their 2021 gala at Trump’s West Palm Beach estate, where they presented Melania with the “Spirit of Lincoln” award. The group produced a fawning video touting the former first lady’s “passion for equality” that has to be seen to be believed.

Needless to say, their Stonewall tweet didn’t go over so well:

this is HUMILIATING for you

You should be ashamed, comparing the persecution of homosexuals living their lives to the corrupt dealings of a likely criminal, but you won’t be.

Y’know, there are healthier and more rewarding ways to satisfy a humiliation kink. Just saying.

Don’t you have a convention to get banned from?

Hi, it’s the queers you think you represent, just here to say literally all of us hate you.