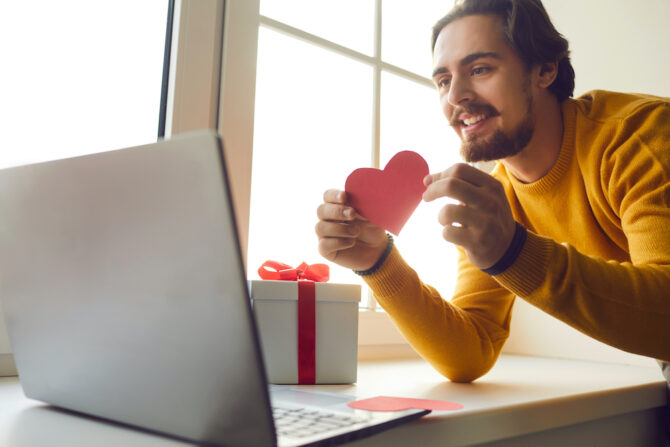 For what it’s worth, a study published in the Journal of Communication in 2013 found that duos in long-distance relationships had more meaningful relationships than those who saw each other daily—with the long-distance couples having more frequent communications and more “relationally intense” conversations, as study co-author Crystal Jiang of the City University of Hong Kong told USA Today. “The intimacy developed here is a psychological closeness—it doesn’t include physical or sexual intimacy,” Jiang added. (Then again, these were heterosexual couples, so our mileage may vary.)

Anyway, here’s what Redditors had said about gay guys in long-distance relationship—with responses organized into “yea” and “nay” columns and condensed and edited for readability.

“Can’t imagine I’d be into a long-distance relationship. If I choose you as a partner, I want you with me as part of my life. Not having them there for physical comfort and sexual pleasure would probably be frustrating for me, too. And I’m an insecure person, so I’m into monogamy, so open relationship isn’t an option for me. Long-distance friendship? Sure. Long-distance short-term? Maybe. But long-term? Probably not. (Edit: But I’d never say never, depends on the person and the circumstances.)”

“My top love language is physical touch, so that’s a priority for me in my romantic and therefore sexual relationships, which is something I literally cannot get from a long-distance relationship. The guy could be perfect for me, but I’d need the touch in even the smallest way for me to honestly even consider a relationship with them. But that’s just me.”

Related: The world is in a long-distance relationship right now

“People need more than a digital connection. I did long-distance for nine months, and it sucked. We broke up because we couldn’t do it anymore.”

“I could not do it. I want intimacy, companionship, and to live with someone. I find it difficult to cultivate those things while long-distance. I’m not saying it’s impossible, but being close, it helps.”

“Been there, done that (a few times), not interested in reliving it again. Not saying this happens for everyone, but I’ve found that it can increase the pressure every time you’re together in person and turn it into a production, which does not reflect what your everyday life together would actually look like. I’d rather have something low-pressure, casual, local, and fun.”

“My long-distance online relationship turned into a ‘real-life’ relationship, which turned into a marriage of 14 years and counting. … We met on LiveJournal and formed a friendship that turned romantic after about five months or so. I confessed my feelings for him online, and it turned into an online relationship. We met in person that summer and spent it going on dates and having sex, and it ended with him moving to Maine from California to be close enough to drive to see me every other month. More dating, sex, and talking happens for about three years until I move to western Canada to find work. We get married about a year later, and he moves to Canada, gets a job, and we live together for those 14 years. We move to Ontario, and it’s been fantastic, and I write this while he snores on his side of the bed.”

“I’ve been with my husband 17 years, and we’ve probably only lived together for about seven of those years. The rest of the time, we’re usually in different countries due to our work. But it does mean the time we do spend together is incredibly special.”

Related: It was love at first sight. Then she moved 8,000 miles away…

“I live in a small town, where the dating community for gay men is slim pickings. There are, like, five of us around my age, with one of my major exes being one of them, and the rest being mutual friends. I ended up expanding my range and have been dating my current boyfriend, who lives an hour and a half away from me for about six months now. We see each other every single weekend and text or call each other daily. It’s actually been sort of nice, having set ‘relationship’ time and set ‘me’ time during the week to focus on my own interests/hobbies, and I think he feels the same. But it will be nice one day to get to wake up next to him every day.”

“Me and my boyfriend have been at it for three years. We met online and didn’t really want a long-distance relationship, but the chemistry was there, and after seeing each other in person, we decided to give it a shot. If all goes well, we marry next year and move in together. This sort of relationship does work, but it has to be the right person, someone you are willing to wait for… and they can be very hard to find.”

“Met my boyfriend on Grindr, like, the first week he downloaded the app. Basically, it was finals week, and he was about to graduate from university, and I was about to go home for the summer after my finals. Chatted for a month and then went on our first date, which was really good, and then he went backpacking in Europe for two months, like, two days later, LOL. I went back to school, and we didn’t really think anything would really work out, but we kept talking and had a few visits, and things became official after maybe six months once I confessed my love. Lots happened after that, including him teaching in Asia for a year and me going across the country for grad school, but we continued long-distance for a total of five years. … Just celebrated our seven-year anniversary and planning to move into our own place together for the first time in a new city this year! Long-distance is incredibly tough but truly rewarding. … Communication and trust are obviously the two main important factors to making it work, as well as being independent, since you aren’t together most of the time.”

what a joke
24 comments