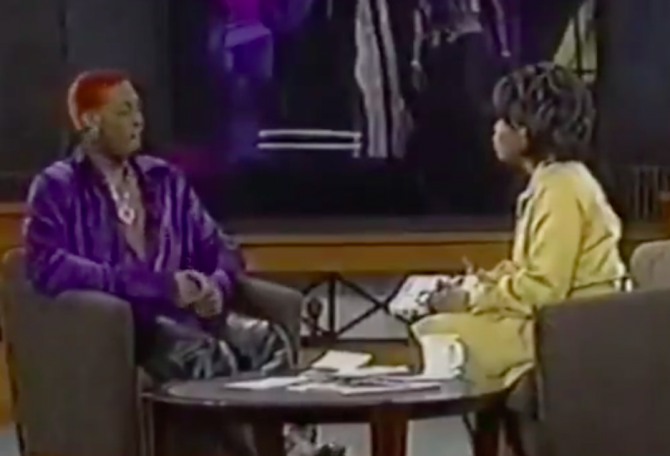 At the time, Rodman was at the peak of his popularity and was making tons of TV appearances. His highest profile one was on Oprah’s show in 1996.

A snippet of the interview resurfaced on Twitter this week. It shows Rodman being asked about his sexuality, which has always been a hot topic of conversation.

Related: Dennis Rodman opens up about his relationship with gay men in the ’90s

When Oprah questioned whether he was worried about his “sense of sexuality” as a young person, Rodman replied, “I was very scared to be around boys. I didn’t know how I would fit in because I was so shy.”

After the interview started circulating on social media, many criticized Oprah for her line of questioning, which bordered on interrogation.

In her defense, it was a much different time and we’re 99.9% sure she wouldn’t ask those same questions today, nearly 25 years later. Also, it’s not known whether she ran them by Rodman prior to interviewing him. Often, high profile sit-downs like these are scripted in advance.

Oprah is so damn rude , she basically wanted this man to say he’s gay so bad ….

These old clips of Oprah make me realize how problematic she was & how she was able to attain her level of success. She consistently vilified her own community for the White gaze, for DECADES. I was way too young to get it then but I’m grown & wide awake, now.

I understand the conversation of black mans sexuality was taboo (and still is) but the man said no several times, and why does the audience seem so hostile to the idea of him saying yes?

Dennis is comfortable with himself, why tf is Oprah trying to pressure him into saying he is gay?? pic.twitter.com/si0xH8e13t

she asked the same question 30 times in 15 different ways …

i really hate oprah. like she asked him so many times was he gay passive aggressively as if asking him again would make him change his answer like shes so fucjing jarring bro.

And if he said he was gay or bi what was the endgame gonna be?

This isn’t the first time Oprah has been criticized for past interviews she’s conducted around this same issue.

Earlier this year, actor Nathan Lane recalled going on her show while promoting The Birdcage in 1996 and having Oprah question whether he was worried about being typecast in gay roles.

Lane called the line of questioning “terrifying,” adding, “No one had been interested in my sex life up until then.”

Related: Nathan Lane recalls that time Oprah tried to out him on her show, says “It was terrifying”