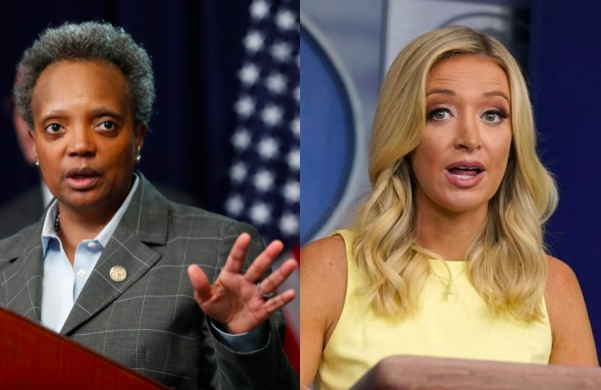 Let it be known, in case it wasn’t known already, that Lori Lightfoot takes no shit from anyone.

“The derelict mayor of Chicago should step up and ask for federal help because she’s doing a very poor job at securing her streets,” McEnany quipped, before accusing Lightfoot of letting people die in the streets.

The statement was deeply ironic, of course, given the 140,000 and counting Americans who have needlessly died as a result of Trump’s botched handling of the coronavirus pandemic.

Well, Lightfoot wasn’t having any of Kayleigh’s coded nonsense. In response to a post about McEnany’s remark, she tweeted: “Hey, Karen. Watch your mouth.”

Lets be clear. White conservative karens’ and Kens’ DO NOT care about Black and Brown folks dying at the hands of gun violence, never did, never will as far as i am concerned.

Karen has some audacity…catch Mayor Lightfoot outside after Karen is jobless come January. How bout dat.

Mayor, they can ALL kick goddamn rock. You’ve been Mayor for 1yr and 3mths. This problem waaaaay proceeded you. They attack you because you’re Black female and lesbian. Period! Did they attack Rahm and Dailey the same way? And this gun violence started on Dailey’s watch!

Thata mayor!!
Got my money on you every time! 👏🏻

Remember when we had a leader that cared in the Whitehouse? pic.twitter.com/KrPDcCmnfS

Epic reply. Also, the only reason the trump administration has a hard on for Chicago ia because Obama lived here. Otherwise he’d never think about it.

i find it ironic that all the people crying over gun violence are the same people who would cry bloody murder the moment you suggest having stricter gun control laws and have “magic negro” syndrome thus expecting a single black person to fix all generational issues overnight. 🤔

In recent months, Lightfoot has emerged as one of the loudest national voices speaking out against police brutality and the Trump administration’s response to the Black Lives Matter protests happening around the country.

In May, she literally said “F you” to Trump during a press conference after he called for “thugs” (his word) protesting the death of George Floyd to be shot in the streets.

“I will code what I really want to say to Donald Trump,” Lightfoot said. “It’s two words: It begins with F and ends with YOU.”