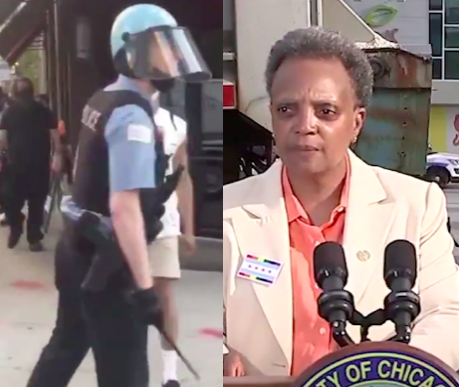 Chicago Mayor Lori Lightfoot has a message for the nameless police officer who was caught on tape calling protestor a “f*cking f*ggot” last week: You can run, but you cannot hide.

The shocking footage began circulating late last week on social media and has now been viewed over a million times. In it, the unnamed officer can be heard screaming at a protestor, “B*tch! Wait ’till I turn my back, you f*cking f*ggot!”

DO NOT STOP POSTING #BLUEFALL. EXPOSE EVERYTHING THEY ARE DOING. https://t.co/ONPlpSu4vs

The Chicago Police Department says it’s investigating the incident and insists that it strives to treat “all individuals our officers encounter with respect,” adding that “appropriate disciplinary action” will be taken if and when the officer is identified.

But that’s not good enough for Lightfoot, who happens to be the city’s first-ever Black lesbian mayor. She told press that she’s not tolerating any B.S. from any bigot cops.

Then she spoke directly to police officers.

“If you are one of those officers who choose to do those things, or to tape over their badges, or to turn off their body-worn cameras — all things that violate very clear directives of the Chicago Police Department — we will find you, we will identify you, and we will strip you of your police powers,” she said. “Period.”

Police misconduct, from harming residents to covering badges to using homophobic language, will not be tolerated. Period. If you believe a police officer has committed an act of misconduct, please call 311 to report it. pic.twitter.com/hvi4UUZuOh