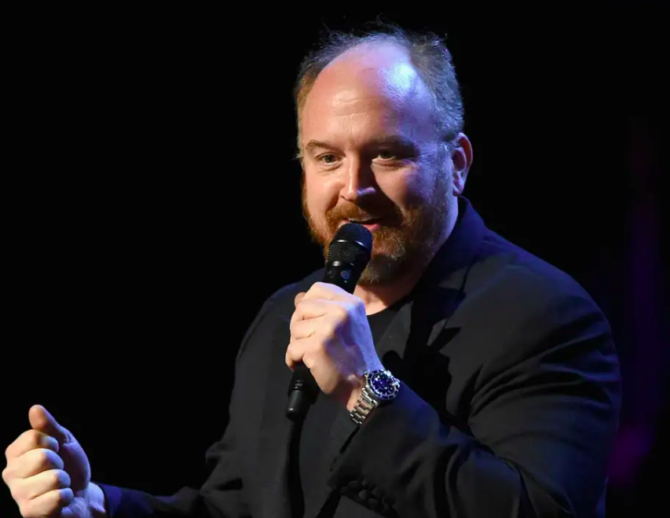 The accused sexual predator is back in the headlines after a comedy set he performed earlier this month at Governor’s Comedy Club in Levittown, New York leaked online.

In the set, the 51-year-old comic panders to the alt-right by mocking non-binary people and the Parkland shooting survivors and using an antigay slurs and other pejoratives attacking people’s identities.

Here’s a little sampling of C.K.’s “jokes” from the set:

On the Parkland survivors:

They testify in front of Congress, these kids? What are they doing? You’re young, you should be crazy, you should be unhinged, not in a suit… you’re not interesting. Because you went to a high school where kids got shot? Why does that mean I have to listen to you?… You didn’t got shot, you pushed some fat kid in the way, and now I’ve gotta listen to you talking?

On fighting with his doctor:

‘You need to stop eating ice cream.’ I said, ‘You need to go f*ck yourself. And don’t ever touch me again, you old f*ggot. You old f*cking Jewish f*g. Get your f*cking hands off me.’ You’re f*cking with my ice cream, I get upset.

In addition to that, C.K. also went on a lengthy tirade about “retarded” people and made racist remarks about the difference in penis size between black, white, and Asian men.

Video of the set, which was performed on December 16, leaked online over the weekend. It has since been removed from YouTube, but not before sparking an outrage on Twitter.

To anyone who knows Louis CK, please deliver this message for me. My daughter was killed in the Parkland shooting. My son ran from the bullets. My wife and I deal with loss everyday. Why don't you come to my house and try out your new pathetic jokes? https://t.co/tZI9ThSciR

I feel absolutely disgusted that I use to think Louis C.K. was funny.

And by the way, Louis C.K., I can do jello shots, party my ass off with friends, and still have the wherewithal to give a damn about school shootings and trans folks being discriminated against by lazy, bigoted assholes.

We can multitask. We already are.

Comedy should be about punching up.

And masturbator-at-large Louis C.K. mocking the articulately outspoken teenagers from Marjory Stoneman Douglas High School is the epitome of punching UP. pic.twitter.com/03BuLli3mj

The fact that Louis C.K admitted to sexually harassing women and then continues to use his platform to make fun of mass shooting survivors and non-binary people?? Who’s letting this man make money

I’m generally a believer in second chances for those who make amends for their wrongs. I don’t know that Louis C.K. ever made amends, regardless he’s spent all the chances I’ll ever give him. https://t.co/zrHsaToLf3

Louis C.K. and Kevin Spacey starring in "Go Away Now: No One Wants to Hear Another Word from You"–a Harvey Weinstein Production.