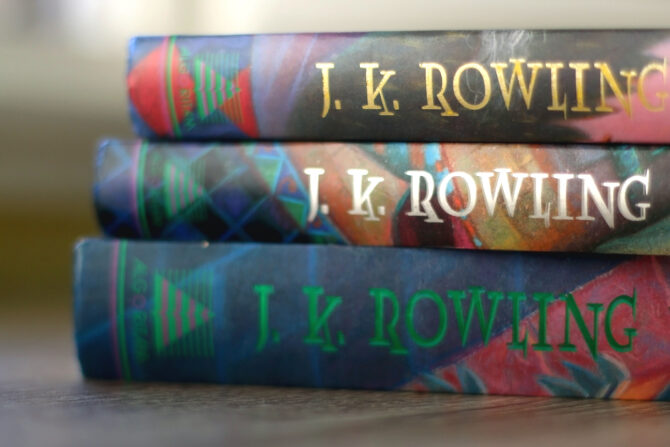 With the Harry Potter 20th-anniversary special hitting HBO Max on New Year’s Day and Fantastic Beasts: The Secrets of Dumbledore arriving in theaters this April, J.K. Rowling’s world of wizardry and witchcraft is still casting its spell over pop culture.

And yet Rowling, the author of the Harry Potter books and a screenwriter of the Fantastic Beasts movies, continues to spew transphobic views. And for many LGBTQ+ fans — the ones who know that trans women are women — she’s sapping the Harry Potter universe of its joy, Dementor-style. Now even Quidditch leagues are seeking new names for the sport to distance themselves from the author.

So, can one be a Harry Potter fan and a J.K. Rowling detractor? LGBTQ+ fans gave their takes recently after one Reddit user solicited opinions on the matter. “Harry Potter is probably my favorite books, movies, and universe, but I’m trans, and I’m not liking J.K. too much these days,” that user wrote. “The way I see it is, great artists aren’t necessarily great people. I still like the universe I don’t care that much about J.K. as a person, to be honest. Thoughts?”

We’ve said “accio” to some comments from that thread and reprinted them here, edited for clarity and length.

“My opinion on this is that it’s fine to enjoy things quietly and not justify your preference to anyone. I feel like the culture of online discussion and fandom identity is such that people see a criticism of something they like as a criticism of themselves and feel a need to defend themselves. You don’t need to defend Harry Potter, you don’t need to justify your desire to read or watch or enjoy any of it … I don’t think that picking up your old copies of the books and re-reading them has any sort of moral significance. It’s not a political statement, and it isn’t affecting anyone else.”

“I already own all the books and movies and have done for many years. Rewatching and rereading them won’t put any more money towards J.K. That being said, I won’t support the franchise in any way now — any new merchandise or content I won’t put a cent towards seeing or obtaining. I’ll only watch Fantastic Beasts illegally online and forgo any cool modern Harry Potter merch because f*ck that vile wench. It’s not really a sacrifice at all when you think about it.”

“Yeah, it’s very sad when your childhood hero comes across not as a great person. The worst thing is, it’s not that difficult: Stop being transphobic for f*ck’s sake. I would just like so much if one day she apologized for all the nonsense, but I think that day will never come sadly.”

“You can absolutely love the art and loathe the artist. Rowling is an awful human, but she wrote a good book. H.P. Lovecraft was truly vile with his opinions, but he was a literary powerhouse for the science-fiction genre.”

“Also, she is no longer the only artist. All the actors for the characters in the movies, all the fanfic writers, the set designers and directors, etc. They exist. They are a big part of the art.”

Related: Margaret Atwood just added her name to the list of authors with transphobic leanings

“J.K. Rowling is a hateful asshole. It’s that simple. I used to be a big fan, but I can’t abide her work now. She turns my stomach. I will never give her another penny she can spend on spewing her hurtful sh*t.”

“The main story of Harry Potter is one of overcoming abuse and helping others, and I understand how important this can be for people. However, the canon of Harry Potter has racist, antisemitic, sexist, colonialist, and other deeply upsetting currents that I can’t ignore in favor of the overcoming-abuse through-line. If you can and do, that’s your way of consuming this media, and that’s fine by me. We all set different priorities according to our needs and wants, and that’s OK! I would hesitate like hell to put money towards any of JKR’s intellectual properties, though, because we know for a fact by now that she channels this money into transphobic campaigning that actively hurts people. So even if I found her work wholly uncontroversial, I wouldn’t buy it or stuff connected to it.”

“I don’t really care if people continue to enjoy her works. That is their decision, and I can’t and won’t police that, as long as they leave me alone with it.”

“I just don’t think we should continue giving her money. It actively funds her and her platform so she can continue to spread transphobia. And it’s so easy to just get books and movies from a library instead or to buy them secondhand, as well as getting unofficial merch that doesn’t have anything to do with her. Another thing is, I just feel like if people consume it, they should do so responsibly while being aware of (and acknowledging) the flaws of it. Because her views do reflect in her books. You don’t have to do a full analysis — just acknowledge that it’s not all sunshine and rainbows. But yeah, the money issue is the most important part, in my opinion, because it actively supports her.”

“I think you can enjoy the universe that’s been created while still acknowledging the serious flaws in it. You can also still enjoy the universe while avoiding financially supporting the creator who is undeniably transphobic. But I think if we tell someone to give up something that honestly brings them some joy in this world, regardless of our own opinions on it, we can only expect pushback and resentment. Educate, don’t dictate. Give people the chance to find their balance between enjoying something that brings them happiness and supporting the community.”

“I get a bit tired of people trying to explain this all away. I’m sorry your favorite books have become mired in controversy, but I’m afraid you can’t separate the art from the artist, no matter how much people try to rationalize it. There are other books to enjoy, other worlds to explore. Ones where the author of that book isn’t a hateful person. No one wants to say goodbye to something they love, and it’s OK you liked it when you were younger, but to say that it’s bigger than her or that she wrote it 20 years ago is kind of like burying your head in the sand. I hope you find more worlds that you love as much as this one.”

Subscribe to Queerty for a daily dose of #entertainment #harrypotter #j.k.rowling stories and more