Time changes everything, and nobody knows better than queer people. The advances of the past 20 years have heaped enormous benefits on the community, which begs a certain question: what if we’d had them sooner? How would life be different? These questions preoccupy first-time director Lucio Castro, and are the heart of his award-winning first film, End of the Century. It plays aGliff August 24 before a national rollout.

End of the Century follows the tourist poet Ocho (Juan Barbenini) while on the make in Barcelona. After a steamy chance encounter with the handsome family man Javi (Ramon Pujol), he realizes the two have met before, 20 years in the past. The attraction between the pair prompts Ocho to examine his life choices, and imagine what could have been–the life he could have had–if the two had met at a different time.

Castro grew up in Buenos Aires before moving to New York to study design. After a successful career in men’s fashion design, he began making short films and writing screenplays as a hobby. End of the Century marks a culmination of years of study and work; it’s Castro’s debut as a feature film writer/director.

I must confess I was a bit nervous going into the opening scenes. I don’t think there is any dialogue for the first ten minutes. You take some very big risks as a director in this film. Where did the story come from for you?

I’d made a short that was in Cannes. I spent a summer in Barcelona, so I wanted to make a movie here. I’d had two features that I still hope to make, but they both take more actors. One’s set in Argentina and it’s a big cast of elderly actors—much more difficult to make. So I wanted to make something with the idea of simplicity, with a very small budget and a very efficient way of filming. With that idea in mind, a year and a half ago, I started writing the story. I started with a man arriving in a town he doesn’t know. I basically started writing the story without where it was going at all. He comes to town, looks around, meets a guy. They have sex. Then I wondered what if they met before?

The story of course, it’s not directly autobiographical. The only autobiographical part is with Ocho & Sonia, when they describe the break-up. Something very similar happened to me many years ago in Bolivia. The rest is based in my experience—relationships with friends and stuff—but nothing is directly my story.

The other thing that’s immediately apparent is there is an immediate sexual charge. As soon as we meet Ocho, we know he’s a man that knows sex. There’s something about those scenes that intimates that. As a director, how do you go about setting that mood?

That’s a nice point. I definitely had it in mind. There’s something inherent about…when you’re a lone traveler, sex will come up in some kind of way. At night, meeting someone, it comes up. Ocho is an interesting observer. He looks at other people, he looks at architecture. Then he sees Javi walking on the balcony. From them on, you know they might find each other again. So yes. I definitely feel like I wanted to have Ocho alone for a while, and the movie starts without a lot of dialogue. When I’m alone in a city, I’m very aware of what happens to me. When I’m with someone, the city becomes a background. So I wanted to make it clear that as an observer you are way more aware. When he’s with Javi, it’s more about what they say and what they do.

It’s interesting you describe Ocho as an observer. I felt that way watching. Throughout the film, there’s also a feeling of voyeurism.

We feel like we’re just invisible watching people wander the house or through life. You like to use long, unbroken takes. That’s most impressive in the rooftop scene. How do you go about directing your actors in those scenes so that they are natural, and so that the scene never gets boring?

[The rooftop scene] was a very hard scene to shoot. I wanted that light. I wanted the sky to change to night, so if you actually fast forward that scene, the light is very dark and it changes colors throughout. I wanted the sky to create the idea of time. So for that, it has to be one take. If I cut back and forth between them, the sky wouldn’t match. Also, to me, I find it always more interesting to look at the character who’s not speaking. So by doing this shot where they are both in the same frame and not cutting from one to the other, I give the audience the chance to see what he’s thinking.

Related: Trans actor Jake Graf says Colette “Sleeps with people because of who they are, not gender”

In terms of the actors, they are very smart people, smart actors. They met a day before we started shooting to try out their chemistry. They are also very different, the Spanish actor, Ramon, who plays Javi had super-rehearsed his scenes by himself. Juan, who plays Ocho, only memorized the scene the day before. He read it three times and knew all the dialogue. So it was a beautiful chance encounter of time and sky and things working out. We did five takes because it was getting too dark to do another. So we ended up using the last take.

The actors also have some very intense sex scenes. They’re very frank, and it’s the voyeuristic element again. It feels like just watching two people have sex. How do you go about directing the actors in a scene where they are completely naked and simulating sex?

Basically for the sex scenes, there was one thing I knew I wanted. There are many ways of shooting a sex scene. Some directors say “Ok, pretend like you’re having sex and I’ll do some shots. Just ignore me.” And actors always find that super tiring.

It’s very tiring. It’s very awkward. So I [told them] “You’re going to see this part. This is the frame. Just go all out in 15 seconds.” And they really liked that. They felt like they knew where the shot was, what parts we could see. They were both totally naked of course. And the one comment I told them was in sex—at least when I have sex—don’t try to look pretty. An awkward face is great. A weird face is fine during sex. Some people get possessed by a weird beast, so let that come out. Don’t worry about looking hot or looking pretty. Do something more animalistic. That direction really took, and they did a really good job. We also shot those scenes very fast. They were so choreographed that they went super fast.

That’s great. In a way, this film reminded me of Frank Capra’s movie It’s A Wonderful Life. I assume you’ve seen it…

It’s great. That may sound strange, but both films are, in a way about men reflecting on the choices in their lives. Not just that, but the way his choices affect others. This is something everyone does, but for queer people, so much has changed. Do you find yourself haunted by your own choices, or the way times have changed?

Yeah, for sure. Exactly what you said: so much has changed in the past 15-20 years. And calling the movie End of the Century is meant to contrast 2019 with 1999, you know? Especially in gay culture, the fear of AIDS was so scary in the 90s. Now, it’s fine. There’s PrEP, you know? Adopting kids, being ok with being out…being gay in the past ten years has completely changed. It’s very different. And about choices, for sure. I’m most fascinated by, when meet somebody it’s always a matter of fate. It’s not only if you like the person or not, but people that I’ve met before, if we were in a different time in our life, we maybe would have been together.

So I liked the idea of a couple could have worked, but for some reason, we were not in the right time and it didn’t work. It’s kind of amazing how one choice can drastically change the course of your life. We like to think we’re in control of our life, but actually one choice completely changes the direction. For sure, the movie is a gaze into what could have been. Our lives are the sum of things that happen by choice or at random. They’re small, but they build up and creat a life.

In It’s a Wonderful Life, George Bailey realizes the value of his life and his choices.

In your film, things are much more ambiguous. Do you think of Ocho as a lonely character? Or is he just a loner?

Hmm. I don’t really see him as a lonely character. He’s at a time in his life—in his 40s, he’s just broken up with someone after 20 years. He’s a poet, but he works in marketing for an airline. So I do think he’s in the time of his life where he’s very contemplative that he’s halfway through his life. What is life? He’s very contemplative, but I wouldn’t say he’s a lonely character. But I do think in the moment, on this trip as it’s happening…he really wants to be with someone, and he wants to connect. 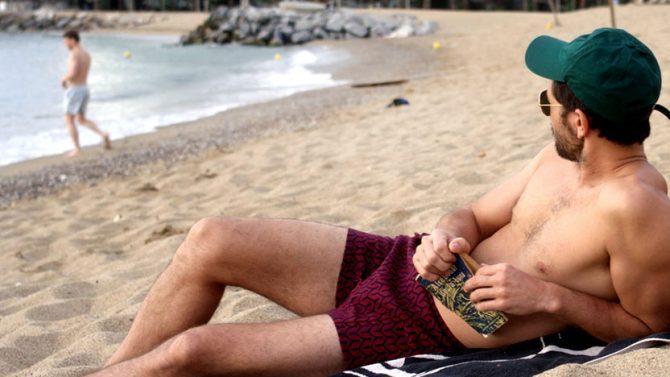 Directing a film is a monumental task, especially the first time. In reflecting on making the film, and on your own life, what did you realize about your choices in life?

That’s a very nice question. I always, always wanted this moment to happen. I’ve always loved film. I studied film before I studied fashion. I made short films, I wrote long films. This movie was actually fast and sweet to make. I was in complete control. I wrote it. It was an amazing process. But, the process that led me here was actually a lot of work, a lot of rejection. So it’s just a sum of things. And yes, it’s completely and simply a dream true in the total sense of the word. It’s nice that it’s a result of all the years of writing stuff, sending stuff to festivals, making shorts, showing stuff to friends, and of course, watching movies. It’s a direct consequence of all this stuff. But this movie was very easy to make.

What’s next for you then?

I’m writing a script to be shot in New York in a similar scale. And I’m still moving two other projects I made along. So one small scale, one medium scale, and one large scale.

End of the Century plays aGliff August 24. A national rollout in major cities will follow.