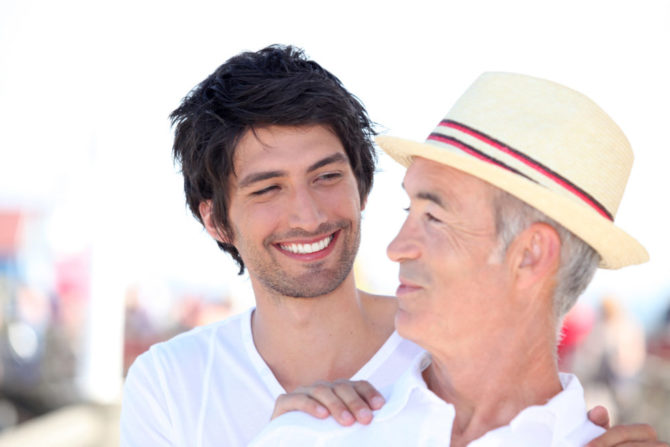 The Twink and I were in the middle of an intense session when he asked if I’d role-play.

I replied, Sure! which prompted him to ask me to play his dad and pretend to rape his 7-year-old self. He took a hit of poppers and proceeded to tell me the intimate details of an incestuous dad who took him and his brother every night after Mom went to bed. I was freaked out and ended the interaction.

He didn’t want me to leave him alone, cried, then just as quickly jumped up and practically ran out of my apartment. He blocked me on Grindr even though he’d originally pinged me.

Daddies, as is widely known, are in vogue these days, and pretty much not a day goes by without a young dude DILF-hitting on me with a line that says something akin to Be my Daddy, or, with increased frequency, Can I be your son, Dad? Of course, there are also plenty of the I already have a Dad, f*ck off types as well–the no one over 40 crowd.

I haven’t spent a whole lot of time trying to figure out the interest from younger men beyond a basic Father Figure desire. A 24-year-old I once slept with, Eric, who practically stalked me until I consented, admitted that I looked just like his uncle, whom he’d always had a secret crush on. Sweet. Another guy I see on occasion, Rob, 31, told me after we met that he thinks Daddies are better in bed and don’t jerk him around as much as younger guys. It’s all good.

But after this young man’s rape-role-play wish, I decided to ask a therapist if he thought there were other issues at play with a minority of dad/son hookups, and to ask other young guys I’ve known in a way Mike Pence can only dream about, if, perhaps, they were looking for something in our meetings that would be better worked out on a professional’s couch.

Added Shewey: “You have to ask, ‘What are the healthy aspects and unhealthy aspects?’ A lot of us were not well-parented, so we look for acceptance and teaching from someone who has more knowledge and experience. Nowadays, younger guys have a lot of reasons to be averse to their peers because their peers are Mean Girls and snarky and go quickly to being very nasty. Older guys tend to be more respectful.

“The shadow aspect is a lot of projection. He [the older man] projects wisdom and stability that he may or may not have.”

Since I grew up without a dad, and was always attracted to older guys, this made a lot of sense. I just wanted to make sure I wasn’t messing around with any young guys’ brains. I questioned them next, these men who are actually young enough to be my sons.

Derek, 27, laughed when I asked him for a quote. “Older men aren’t flakey like young guys. They’re blunt, they’ve figured out their sexuality, they don’t ask you out and then ignore you for, like, three weeks. With a lot of guys my age, they’d just as soon buy a new pair of shoes as have sex. It’s like I’m a toy and some days they want to play with me and on other days get their hair cut.” He signed off by saying, “No, Dave, you’re not doing me any harm. Re-lax!”

Rob concurred, adding, “Everybody loves a top, and older guys are better tops.”

Why thank you, Rob. Cialis and I do our best.

Only one guy, Jim, 26, shared a disturbing experience.

“I used to have a regular FB, a guy about 50, who was really hot. I was so stricken by that, and his dominant personality, that I started asking him to get more aggressive, allowing him to tie me up, put me in a sling, let me be his ‘boy.’ Maybe it was a way of finding affection from an older man, but it got to be too much. He was overly aggressive, the sex hurt, he starting taking me to sex parties where others could have me while he watched, taking me, you know, whenever he wanted, even in public places. I realized that he really thought of me as his property, so I just stopped returning his texts. But I still love older guys, and I have to be honest in admitting I consented.”

If there wasn’t more commentary on bad long-term relationships, it’s because I realized, none of these guys had interest in older men as serious boyfriend material. It wasn’t negative sexual experiences that kept them away; it was age.

Eric’s in a long-term relationship with a man his own age—“We’re gonna get married and have kids, so no, it would be out of the question, even if I wasn’t attached.”

“I love older guys, but I’d never date one long-term,” said Rob. “They’re just fantasies. When it comes to spending time with someone, I want it to be with a guy who shares my experiences and interests.”

“No f****** way!” said Derek, laughing. “I’m not gonna be with a guy who’s gonna be 60 while I’m still in my prime. And, yeah, older dudes are really hot, but they’re also hung up on re-living their youth and working out their own stuff that I can’t really relate to. They don’t have stamina, the stamina to stay out real late—and if they did still do drugs and stuff I’d be worried—and, seriously, why aren’t they in a relationship yet? But, and I mean this, I think older guys are hot, hot, hot, and I get turned on and flattered when one of them wants me.”

OMG! I felt, like, so objectified, learning that these boys just wanted me for my Dad Bod and Netflix-navigating skills. The indignity of it all.

That’s when Kevin, 33, a pumped-up, All-American-looking jock, chimed in. He’s truly the only younger man I’ve been with who’s had a few rules that could fall into the category of unhealthy, depending on the extent to which they run his life. When I meet up with Kevin, he will only call me “Dad,” and will only let me call him “Son.” He asks that I try and run past his doorman so he doesn’t have to hear my actual name announced when I’m on my way up.  And, yes, he likes it when I help him “prepare,” and “mark my territory” in the shower. Was I enabling Kevin by allowing him to re-live some horrible childhood trauma?

“Don’t be ridiculous,” he said. “It’s all fun and games and we both agreed on the rules before it started. If it bugs you, I’ll stop.” As for relationships with older guys, he had this to say:

“I’m a very successful entrepreneur, and I have a very busy life. I would love to be in a long-term relationship with an older man. Guys my age don’t really know what they want, they play games, they’re judgmental and girlie, they’re bad at sex, they party all night, they do all the stuff I stopped doing about five or six years ago. I’d much rather f*** with a really hot dad and then hit the gym. I’m all in for that.”

So, what did I learn from all of this? Be cautious, be healthy, talk first, remove yourself from any uncomfortable situations, and, in the case of Kevin, reserve some extra calendar time for an early dinner followed by some quality time, just “father” and “son.”