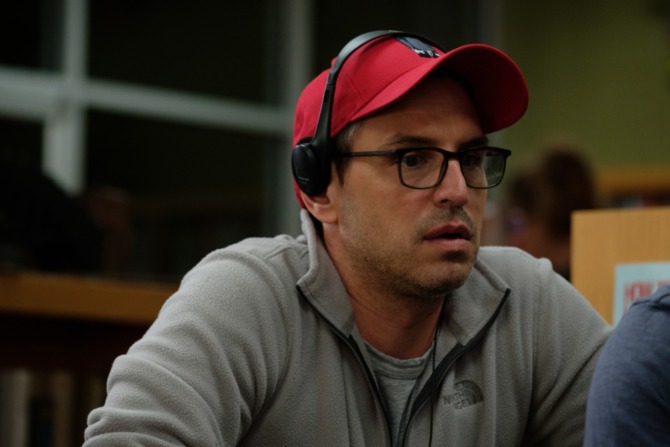 Greg Berlanti keeps the hits coming. As the producer of a litany of great shows aimed at young adults–Dawson’s Creek, Brothers & Sisters, Green Lantern, Everwood, Political Animals, Arrow, The Flash and Legends of Tomorrow–everything he touches turns to gold.

But in the annals of cinema, Berlanti may well leave his mark with Love, Simon (opening March 16). Based on the novel Simon vs. the Homo Sapiens Agenda by Becky Albertali, it’s the first ever major studio film aimed at teens to feature a same-sex romance. It also features a diverse cast: Alexandra Shipp (X-Men: Apocalypse), Katherine Langford (13 Reasons Why) and Keiynan Lonsdale (The Flash) play the lead roles alongside Nick Robinson (Jurassic World) as Simon Spier, the closeted gay 16-year-old who falls in love via text with another male student at his high school.

So it seems fitting that when we track down Berlanti for his Queerty interview, he is chatting with an old friend who would be concerned with such things bigger than hits alone: his college drama professor.

Pointing to an overstuffed easy chair, he says goodbye to his proud prof and sits down for a conversation.

Dressed in a dark sweater and his trademark black-framed glasses, Berlanti sipped coffee–no doubt out of necessity given his hectic schedule leading to the March 16/20th Century Fox release.

Your film Broken Hearts Club (2001) [an indie movie about a community of gay men in West Hollywood] is a great companion piece to Love, Simon—not so much in that it’s about gay life, but the ideas are similar: camaraderie, youthful idealism and the angst of coming out and setting out on your own.

This time I was pretty conscious of it. I think totally to just in terms of the blend of comedy and drama and how required actors the kind of could definitely do that and would sort of help set that tone of. Working on it made me feel the same way that working on Broken Hearts made me feel. I knew it was not going to be everyone’s gay story, but it was part of my gay story in this area and it made me feel connected.

How do you think you’ve evolved as a filmmaker?

TV gives you is the opportunity to learn from all kinds of women and men what their techniques are. Craft wise, it helps you get better. Then I just think in some ways also—going back to your initial question—part of it is you learn by kind of going back to your roots. And for me, there were some things I did on Broken Hearts I didn’t even realize I was doing, just even filmically, that I went into this with the desire to try again. And even though it was a big studio film, there were just things thatI just really wanted to do, and not feel limited to a studio structure. Like still capture the kind of authenticity of it, you know?

Even going back to Dawson’s Creek [the long-running WB/CW teen soap noted for its frank depiction of sexually active characters], which also had a breakthrough gay character, you have been sprinkling projects with gay characters and diversity.

Yeah, I mean, I think my primary objectives particularly when casting is to just cast the best actors in the parts. And in doing that, it’s led to a lot of diversity because the best actor who walks in the room sometimes, you know, isn’t always white, thank god. The more you cast people who look and feel like the world we all live the more powerful and authentic it becomes.

Teen comedies or dramas tend to get unbelievably glossy, like the new Spider-Man. Tom Holland is impossibly perfect looking. Your actors in Love, Simon don’t look as perfect and are difficult to sentimentalize. They have skin problems. They look like real teenagers.

It’s still a mainstream studio film so they’re still, you know, there’s going to be a certain amount of polish. But I think one of the things that was so evocative about the ’80s films that I grew up on was you really felt a lot of time you were in a real high school. We actually have the producer’s son in one of the scenes, but he looks like the youngest kids. And there’re kids of various ages. Some kids look like they’ve already hit puberty, some look like they’re never gonna hit puberty. And so there is a real cognizance with all of the world and to try and make it look like that where we could. The heightened part is the romance and the wittiness. And the filmic nature of it, you know, is going to lend a gloss. So you fit the reality in where you can.

So you’re son Caleb just turned two. How do you think being a dad has changed your work?

Well I’m definitely more tired. [Laughter] So I do a lot of things I used to do late at night, I do really early in the morning after a good night’s sleep. So that’s the sort of more logistical end of it. But now I think that the number one thing for me that parenting does is that you see the world again through their eyes. And you re-meet things that you hadn’t thought about a long time, because you’re trying to explain concepts to them. Or you’re trying to, you know, see how they see the sky or they see trees or… He freaks out every time he sees an airplane, you know? And now I kind of freak out every time I see an airplane. You could become more jaded or cynical over just as, you know, they start to have a specialness again through his eyes. And that gives you a bit of—it has for me, in an emotional way—given of the spark back to a lot of things.

Do you think of yourself as a role model?

What makes me hold my own head up as a person is to try and—whatever situation I’m in—act with as much dignity, you know, as I can, and to be the best person I can in that circumstance. I’ve found in my life that just makes it easier for me to sleep at night, you know? So if that in any way, by nature of what I do for a living, you know, has an impact on a young person then I’m really happy about that. But, you know, but first I have to do it for myself and for the people around me. 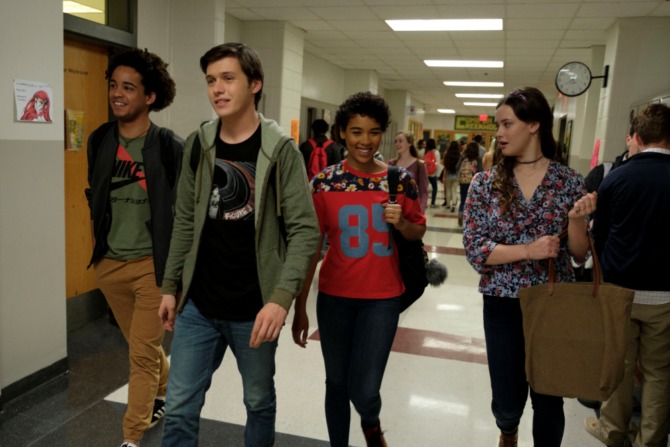 Did you have a lot of gay role models growing up?

There were a few people. But two of whom you know, without being specific, you know because it was a different time. And were clearly closeted. I had three that I can think of, and two died of AIDS. It was a challenging time for everyone.

Related: 10 must-see gaytainments to look forward to in 2018

Social media and outing play large roles in this film. How do those issues play our in your own life as a public figure trying to have a modicum of a private life with husband Robbie Rogers?

I’m generally, in the head, instinctually private. But at the same time, in both my relationship and in my in being a parent, I’ve never wanted the fact that I do what I do to prohibit me from any of the joys of being a parent. So you know when I want to post about my family, I post about my family. And there are times that I’ve said to myself…I’m hesitant because I don’t want to, for whatever reason, to want to put another image out there, because, I don’t know, just because you’re shy or whatever. And then I say to myself, ‘wait a second.’ But I’m sure a lot of people have this internal dialogue about social media.

Social media these days seems dominated by vitriol. The internet has always been like an echo chamber. But it’s like…now it’s just like this furious, vitriolic puddle of nasty. How does that affect your own participation in media and how does your perception of being a dad sort of change that?

I think everything is amplified right now because there’re a lot of tools to amplify stuff. My internal thing for myself is just stay as positive as possible. I don’t think the world needs more negativity, and there’re a lot of times where something happens in politics, or the news… I get so, like a lot of people, get so angry and so hurt. And it’s an easy release to, sort of, want to just post about it. I just try and take a more, for me personally, a more measured approach and then see if those feelings are still there in a day, or three days or four days. And if they’re not going away and I feel like it, it will help me in some way or help somebody else in some way to talk about it. Then I use it that way, and otherwise, I’m usually grateful when I, that I didn’t post angry thoughts.

It might sound silly, but I don’t usually really have much of a plan. I know it’s weird, but I show up every day when something excites me, whether it’s a movie or a TV show. Or usually it involves a person I really want to work with, then I do everything I can to figure out how to work with that person and schedule it in. And through that, again, I think I find it hard enough to just, kind of, maintain my general enthusiasm, and to keep it up. And through that, these other opportunities have emerged. In the past couple years, in terms of the TV shows I’ve been able to work on, and now with this film—I feel really lucky. I’m really blessed. And I’m like, just starting to do some of the favorite work that I’ve ever done. And I’d love to just be able to keep doing it.