The reign of Isis King has begun.

The stunning transgender model/actress first stepped onto the world stage with her appearance in Season 11 of America’s Next Top Model as the first openly transgender contestant on the popular competition series. She moved to acting afterwards, taking various guest star roles on television, including on a three-episode arc on The Bold and the Beautiful. King hit a new career-high in 2019 with her much-lauded appearance on the Netflix series When They See Us for director Ava DuVernay, in the pivotal role of the sister of a member of the Central Park Five. Now King returns to TV with her meatiest role yet–that of a series regular on the Amazon romantic comedy series With Love. It debuts on Amazon Prime Video December 17.

As created by Gloria Calderón Kellett (of One Day at a Time fame), With Love chronicles the love lives of a group of multi-age, multi-ethnic friends living in Portland, and revisiting their evolving relationships on key holidays. King plays Sol, a trans-nonbinary medical resident with eyes for a handsome plastic surgeon named Miles (Todd Grinnell). Though it first seems their schedules will pose the biggest obstacle to their romance, Sol soon learns that Miles has another secret: a nonbinary child named Charlie (Birdie Silverstein).

We caught up with King just shy of the premiere of With Love. The series debuts on Amazon Prime Video December 17.

So first, I haven’t talked to you in a couple years, since When They See Us. How are you?

It’s interesting. For me, When They See Us was the biggest moment for me. And it sucks that coming off the heels of that we had a pandemic.

I’ve done OK in the pandemic because, for many years, for me, there were not opportunities. So I kind of learned to isolate and make it work. For me, compared to most people I knew, I did alright. I’m thriving. And [the pandemic] gave me more time to center myself. So With Love came up for an audition, I prepared. I had just moved and I was in such a better place, a safer environment. So I was there and present for the callback. I’m so blessed. And I stayed healthy.

What was the audition process like for you? How do you get a “lock” on a character like Sol?

Under the description of the character, it said “kind eyes.” I am always told I have expressive eyes. To see that for a trans character is so simple, but so refreshing. We never get to really see the “kind eyes” type person—that’s just now coming into the realm of possibility. So that really caught my attention. To see that Sol had a strong relationship with her family and friends resonated with me. I’m in the same position. And once again, I’d never really read that for a character. So I was just so excited to see a character that was so similar to me in real life. We never get to just see the kind, hard-working, family-loving character. I was just so ready to do it.

It’s funny you say that. I was trying to think as I was watching the show if I’d ever seen a trans-nonbinary doctor on TV before. I can’t think of one, but I know several trans doctors in real life.

I know two in real life. And they’re so sweet. It’s like, why can’t we be the sweet doctor?

I love that. And I loved that Sol’s plot line in the series is their flirtation with Miles, a handsome doctor. You also have several love scenes in the series. Are these your first?

I had a scene many years ago on a project, but it wasn’t a love situation. It was a brutal rape scene. Not to be too dark…

So technically, yes it was. We had Sasha our amazing intimacy coordinator on set. That also made the experience really comfortable for me and [Todd Grinnell]. It really helped. It made me feel really, really comfortable on set. They also wanted to know what I was comfortable with. I’m used to recurring or guest star [roles], not to anyone asking “What’s your comfort level?” Usually, I audition and know this is what it is. I don’t usually have input, so I was excited to have input too. I was just over the moon.

You’ve had several roles since you and I talked for When They See Us, but I think this is your biggest part to date. How does being a season regular challenge you? You’re also doing a mix of comedy and drama here. Is that more challenging for you?

It’s everything I wanted.

I have an acting coach, and I also had one on set that I had a chance to work with. Of course, if I’m going to get free lessons, I’m going to take them.

I don’t have to pay and it will make me look better? Of course! It was different. I have always wanted to do comedy, and I learned that delivery is a little different. Working with the coach helped all of us, and it was really interesting. Look, anytime they ask if you want [an acting coach], even if it’s just to look good, do it. They’re expensive. Even if it’s just for a second in one episode—they were like do you want to do it? I said “Of course.” It’s just prep for the role. 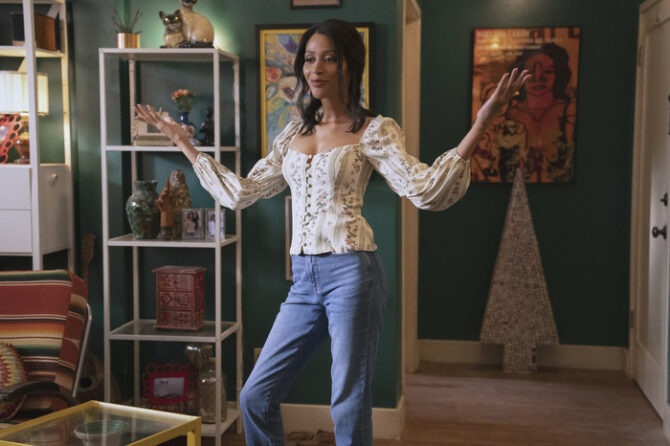 And I was nervous for those intimate scenes. For me, I’m kind of on the [asexual] spectrum. So the intimacy coordinator, having her on set, was very helpful. I think it would help anybody just to talk the scene out and make sure everyone felt comfortable. And we had fun. We cracked jokes. Me and [Todd] are both really goofy. I don’t think I would have slept the night before that scene without Sasha. She made sure everybody was comfortable.

That’s so reassuring. One element of Sol’s story I found particularly interesting was their relationship with Charlie [Birdie Silverstein], Miles’ child, who is also nonbinary. Sol & Charlie have a really hard time relating to one another because of their ages. It’s interesting to me as a man of a certain age, seeing different generations of queer people trying to relate to one another. Sol’s generation, in general, has been more pro-trans than previous generations, but Charlie’s generation doesn’t even understand why anyone would want a gender in the first place. For you, do you think the generations have trouble relating to one another? Is that just a natural thing?

I think it is a natural thing. I will give a shout-out to the writers in the room. Gloria [Calderón Kellett] had some amazing writers—to even get this story, good as it is, you can tell someone queer or nonbinary or on the spectrum wrote it. It was so spot-on. And it is a conversation I do have with friends. To have it in script form was so great. So absolutely—I feel like each generation becomes more open. I also think we need to learn from the generations that have come before us. And we need space to be our own people.

But sometimes there is this disconnect because our experiences are so different. We had to fight. This young generation—they have queer friends and are out. It’s not like you’re the only one, or had to hide your rainbow stuff like I did in school.

Or our parents’ generation, [trans women] had to wear three items of male clothing, or you could get arrested. That wasn’t that long ago. Things have shifted. So it is a different experience, and unless you know your history, you’ll think it was always like that. That’s not the case. And it is a refreshing conversation to have. We can learn so much [from different generations]. We can celebrate who came before us, and I think that’s what Sol’s trying to navigate with Charlie.

So is there talk of Season 2?

We’re waiting to see. We would love there to be Season 2, so fingers crossed.

What kind of roles do you want to pursue from here on otherwise?

And more drama. I find drama—I hate to say it—easy. I have so much to pull from. But I can also play a quirky awkward character, and trans people need to see that as well. But I want to kick some ass and have powers.

I would definitely watch that. I’d love to see you do some kung fu.

I would love to be in a Matrix movie. That would be amazing. And I would be directed by someone trans as well [director Lana Wachowski]. Just call my manager. I always say my dream is to call my manager after training and say I’m so sore. I can’t wait for the moment I’m sore from training. I’d love to do a Charlie’s Angels movie. I remember when Drew Barrymore, Cameron Diaz and Lucy Liu were all training together. I remember saying “One day.” I’ve manifested everything else, so I’m waiting for that one too.

Last question then: what will you do for the holidays?

I’m going to spend it with my godsister and her fiance and our dogs. They’re here [in Los Angeles] too. I used to be really into holidays, but my aunt who was the “big mama” of the family passed. That changed the traditions. Maybe one day I’ll start a new one. Until then, I’m going to get out to my family members in LA.

All episodes of With Love arrive on Amazon Prime Video December 17.