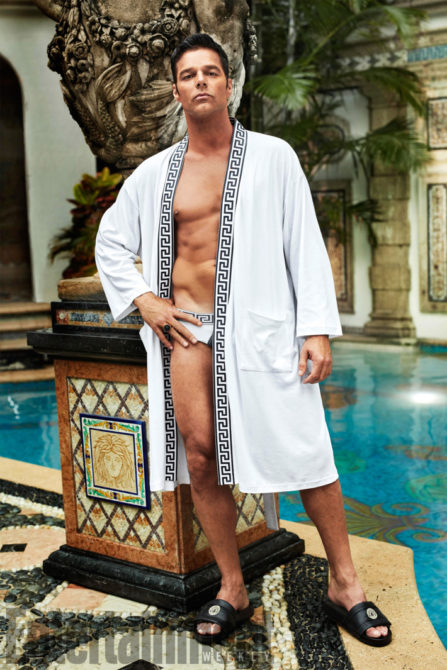 Gianni Versace’s lover of 15 years is upset about the upcoming, highly-anticipated television miniseries focusing on the fashion mogul’s murder.

Now, Antonio D’Amico is breaking his silence to discuss his feelings regarding Ryan Murphy‘s next installment of American Crime Story, which revolves around Versace’s brutal murder at the hands of serial killer Andrew Cunanan in 1997.

D’Amico, who was the first person to find Versace’s body sprawled outside his mansion, has been remarkably silent about the incident — but the forthcoming series, which features Ricky Martin as D’Amico, has inspired him to come forward.

“There has been so much written and said about the murder,” the 58-year-old tells The Observer, “and thousands of suppositions, but not a trace of reality.”

He claims he was never consulted about the series, which will be called American Crime Story: The Assassination of Gianni Versace, and says the images he’s seen are highly inaccurate.

“The picture of Ricky Martin holding the body in his arms is ridiculous,” he says, comparing it to Michelangelo’s Pietà, in which Jesus’ body lies in his mother’s arm after being crucified.

“Maybe it’s the director’s poetic license, but that is not how I reacted.”

He says Versace’s murder on July 15 1997 left him severely depressed for many years, and it’s still difficult to talk about.

“I felt as if my blood had turned to ice,” he says of that day.

He found the body with the butler, explaining the scene thus:

“The house had stained glass windows so we couldn’t see what had happened from inside, so we had to open the gate. I saw Gianni lying on the steps, with blood around him. At that point, everything went dark. I was pulled away, I didn’t see any more.”

The 27-year-old Cunanan killed four other people during a three-month killing spree before setting his sights on Versace. After an eight-day manhunt, his body was discovered in a Miami houseboat. He’d apparently shot himself with the same gun that killed the designer.

“I had never been through a depression and never saw a therapist as I was advised to: why did I need to tell someone else what had happened when I knew I was this way because Gianni’s death had torn me in two? I was in a nightmare, I felt nothing and gave no importance to anything … the house, the money … because it felt false to have expectations of life.”

He has no intention of watching the show when it airs, but would love for Ricky Martin, who’s playing Versace, to get in touch with him so he can get the portrayal right.

“It’s getting to know the small things about a relationship … for example, Gianni was so ordered and focused at work but in his private life, everything was disorganized. He’d leave the bathroom in a mess. At a certain point I said ‘enough’! And when it came to cooking, he didn’t even know how to [boil] an egg…

Sincerely, after two decades, I will always be connected to Gianni as a person I loved for more than 15 years.

But today, I am a different person … the world continues to go around … You can look back at the past until a certain point, [but] then you need to look ahead to the future.”