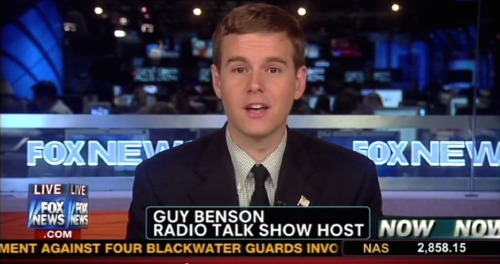 Namely, that LGBTQ acceptance has crept its ugly head into the last bastion of good, Christian values — rightwing propaganda.

Writing for Life Site, Doug Mainwaring takes the network to task for endorsing sodomy and losing sight of our Lord and Savior.

He uses the example of how Guy Benson’s Fox colleagues reacted when he announced plans to marry his longtime boyfriend. Folks wished him well on making official his loving commitment to his partner, but Jesus was apparently rolling over in his cave.

Take it away Doug:

In [congratulating Benson on his engagement], they reveal they are not true conservatives, and that the Catholics among them are not fully dedicated to Catholic teaching. They have a soft spot for romantic sodomy.

He goes on to list all the out Fox News personalities, making sure to use condescending quotations when he talks about their “marriages.”

Later he manages to get a decent burn in at D.C. gays, though it’s really only funny out of context, not the way he meant it — that because Fox films in NYC and D.C., they clearly have been infiltrated by pro-gay factions.

“Gays and lesbians are nothing special in D.C. In fact, they are exceedingly ordinary,” he writes, tongue nowhere near his cheek.

Then he argues that “Fox…publicly favor[s] sodomy for gays over and above chastity.”

Boy, if Fox News is becoming too left-leaning for you, it’s time for a long, hard look in the mirror.