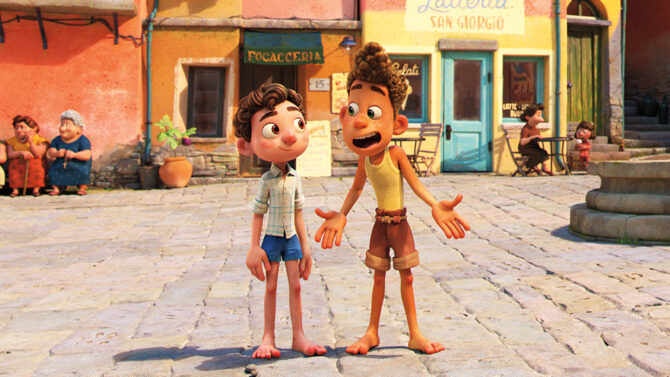 From the moment Disney/Pixar’s Luca trailer was released last February, viewers were quick to pick up on the queer undertones — intentional or not — in the film about two boys who are “different” forming a close bond.

In this case, the characters of Luca and Alberto are both sea monsters, but that didn’t stop the immediate comparisons to Call Me By Your Name.

It even inspired this mashup from YouTuber Zachary S. Marsh, who wrote: “It was hard to ignore the similarities between the upcoming Disney movie Luca and the 2017 Oscar winner Call Me By Your Name, so I whipped this up.

Luca director Enrico Casarosa has called the animated film a “deeply personal story for me,” and explained in past interviews that it’s loosely based on his plutonic relationship with his best friend while growing up in Italy.

In a recent interview with The Wrap, Casarosa revealed he considered making Luca and Alberto explicitly queer.

“We talked about it,” Casarosa said of the two becoming romantically involved. “I think the reason probably we didn’t talk about it as much and, to a certain degree, we’re slightly surprised by the amount of people talking about romance, is that we were really focusing on friendship and so pre-romance.”

“But it is a kind of love, right?” he continued. “There’s a lot of hugging and it’s physical and my experience as a straight man certainly wasn’t that. The things we did talk a lot about is what is the metaphor here for being a sea monster, for being different.

“My version was certainly we were two geeks, losery. But it’s so wonderful and even more powerful for the LGBTQ+ community who has felt so much of as an outsider, right, where this is so real and stronger than my experience.”

“I love that the metaphor is reading in all these different ways,” he added said.

After the release of Luca, star Jake Dylan Grazer (Alberto) came out as bisexual. In an Instagram Live video, he read a fan’s question which asked, “Are you gay?” After a brief pause, Grazer said, “I’m bi.” He then stated, “Silenzio, Bruno!” a line from Luca that his character says to quiet the discouraging voice inside his head. Shortly thereafter, Grazer updated the pronouns on his Instagram bio to read he/they.