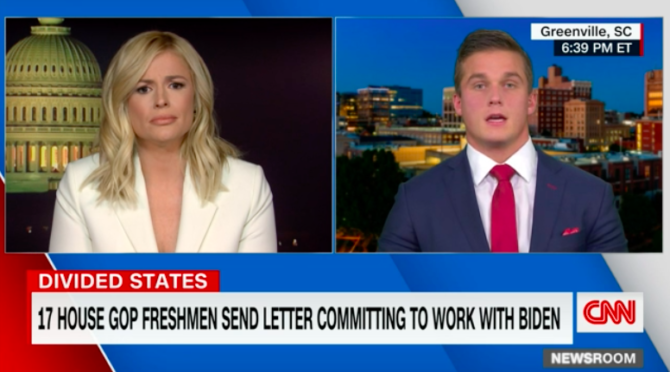 Madison Cawthorn struggled to form a coherent sentence on CNN over the weekend when he was asked about what inspired him to vote to overturn the 2020 presidential election results earlier this month.

When Pamela Brown pressed the freshman congressman from North Carolina on why he objected to legally-cast votes from Pennsylvania and Arizona, he quickly resorted to spewing off debunked conspiracy theories.

“The things that I was not objecting to the election on behalf of was things like Dominion voting machines changing ballots, or these U-Haul trucks pulling up filled with ballots for Joe Biden as president,” he replied.

“The thing I was objecting for is things like, like I said in the state of Wisconsin, particularly in the town of Madison. There was an appointed official in that town who actually went against the will of the state legislature and created ballot drop boxes, which is basically ballot harvesting that was happening in the parks.”

CNN's Pamela Brown challenged Madison Cawthorn to cite evidence of election fraud to back up his vote against certifying the election results. He had nothing. pic.twitter.com/irBADDOciU

When Brown asked Cawthorn for specific verifiable examples of fraud, not debunked conspiracy theories, the young lawmaker found himself at a total loss for words.

“Like I said, that’s not the reason I contested the election,” he squirmed.

“So you wanted to throw out millions of votes without actually seeing any concrete evidence of fraud?” Brown asked. “Cause that’s what you were doing when you were contesting the election.”

After an awkward pause, Cawthorn replied, “I disagree with you on that point.” Then he insisted that he only contested the election to “hold up the Constitution.”

Brown points out the contradiction between Cawthorn saying he has issues with changes to election rules in Wisconsin when his own state of North Carolina made similar changes because of the pandemic.

“I’m not aware of the laws that were changed inside of North Carolina,” he says pic.twitter.com/9E6cWaBZgd

Later in the interview, Brown got Cawthorn to finally admit that, OK, OK, there was no evidence of election fraud, the whole thing was an act, and Joe Biden is, indeed, president.

“When I contested to the election, that was within the constitutional guidelines that the framers had set up,” he said. “But after I’ve done that and the electors and the delegates from each state elected Joe Biden as our president, I respect the office.”

“He is my president, and I want to work with him to make sure that we can bring some meaningful change to the American people.”

Afterwards, Cawthorn’s office put out a statement saying that “while it is difficult to quantity the number of fraudulent ballots cast in any election, Representative Cawthorn stands firm in his belief that objecting to the certification of electoral college votes was an important step in safeguarding a free and fair electoral process.”

Here’s Madison Cawthorn getting cornered into admitting that his rationale for voting against accepting the election results was bullshit pic.twitter.com/SU6W7sGpXi