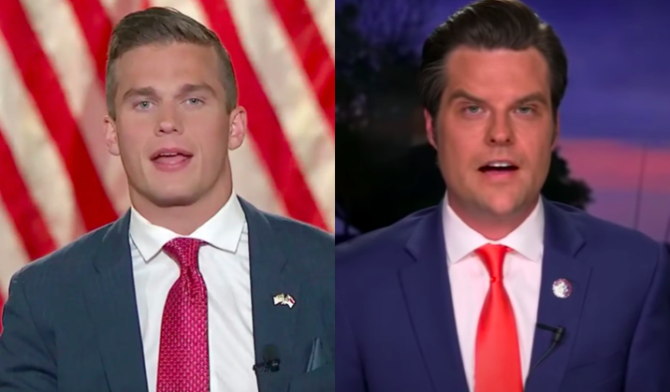 If Madison Cawthorn was hoping Matt Gaetz‘s teen sex scandal would distract from his own sexual misconduct allegations, he can think again.

You’ve likely heard by now that Gaetz is accused of sleeping with an underage girl. Late yesterday, the New York Times reported that the Department of Justice is investigating whether he “had a sexual relationship with a 17-year-old and paid for her to travel with him.”

Gaetz, of course, denies everything and says he’s the victim of a $25 million extortion scheme possibly being led by someone inside the Biden White House. Or something.

Over the past several weeks my family and I have been victims of an organized criminal extortion involving a former DOJ official seeking $25 million while threatening to smear my name.

We have been cooperating with federal authorities in this matter…

Cawthorn is no stranger to sex scandals himself.

Earlier this month, Buzzfeed published a damning report in which more than 30 of his former friends, classmates, and acquaintances accused him of sexual harassment, misconduct, and other inappropriate behavior.

The accusations included calling women demeaning and derogatory names in public, interrogating them about their sex lives, forcing them to sit in his lap, grabbing and kissing them without their consent, and luring them into his Dodge Challenger, locking the doors, and driving them out “to the middle of nowhere.”

The story made a big splash when it was first published at the beginning of this month but quickly faded from the headlines, as is often the case in the modern 24-hour news cycle. But now, thanks to Gaetz, people are once again talking about it, as well as the parallels between the two antigay lawmakers.

The similarities are striking. Both men herald from the South. Both have spoken out against LGBTQ equality. Both love Donald Trump. Both lied about their biographies. Both are obsessed with their images on social media. Both enjoy flirting with white supremacists. Both have been accused of playing a role in the January 6 insurrection. And now, both have been accused of being sexual predators, too.

When is Madison Cawthorn going to be investigated?? These 2 could share a cell together!! @RepCawthorn @CawthornforNC @mattgaetz @RepMattGaetz going

Not sure if this is the best or worst pay-per-view idea ever: Madison Cawthorn vs. Matt Gaetz in a battle of the wits.

Gym Jordan and Matt Gaetz are trending this morning.

Madison Cawthorn is holding a special, secret meeting of his brain trust.

There is an opening here to move up the ladder.

the world no longer needed Matt Gaetz now that we have Madison Cawthorn.

The big question now: Who's next? Methinks we're due for a Lauren Boebert headline.

Let’s not get too excited about Matt Gaetz, it’s the GOP, they’ll cover this up like they’ll cover up Madison Cawthorn at an all Freshman Pool Party.

Gym Jordan: covered up the rape of students at OSU

Madison Cawthorn: sexual predator who lied about his military service

hear me out: what if Matt Gaetz and Madison Cawthorn, but at the same time? call it the newsmax white power hour

After Matt Gaetz it’s going to be @CawthornforNC turn in the barrel. Just wait.

Matt Gaetz is the Madison Cawthorn of Roy Moores’.

In other Madison Cawthorn news, last weekend he flew down to Mar-a-Lago for a maskless meetup with yet another accused sexual predator, ex-president Donald Trump.

“Hello everybody, I’m down here in Mar-a-Lago with the greatest president our country has ever had,” Cawthorn said in a 40-second fundraising video posted to his social media page. “We have big things coming in 2022, Mr. President, big things.”

Wearing a red MAGA hat, Trump responded by calling Cawthorn is a “friend” and saying he has “done an incredible job in Congress.”

“He’s a very special guy and let’s back him all the way, whatever he wants to do,” Trump said.

So far, Cawthorn’s biggest “accomplishments” since taking office in January have been voting against accepting the results of the 2020 presidential race, voting against the Violence Against Women Act, and voting against COVID relief.