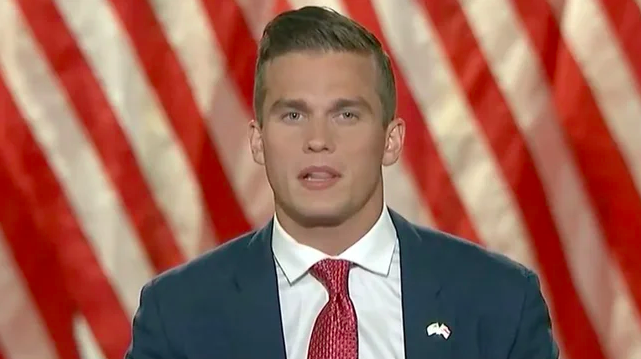 Homophobic North Carolina congressional candidate Madison Cawthorn sure made a fool of himself during his speech at the Republican National Convention last night. Now, after rewriting American history, he’s trying to rewrite his own history to make himself seem less stupid and more smart.

During his four-minute speech yesterday evening, the 24-year-old Nazi enthusiast touted the accomplishments of other young politicians in history, such as George Washington, Abraham Lincoln, and James Madison, who he mistakenly proclaimed signed the Declaration of Independence.

“If you don’t think young people can change the world, then you just don’t know American history,” Cawthorn stated. “George Washington was 21 when he received his first military commission. Abe Lincoln, 22 when he first ran for office.”

“And my personal favorite: James Madison was just 25 years old when he signed the Declaration of Independence.”

25-year-old GOP Congressional candidate Madison Cawthorn hailed the accomplishments of young statesmen on Day 3 of #RNC2020, including his "personal favorite" James Madison, saying he signed the Declaration of Independence.

Twitter was quick to fact check Cawthorn, who was homeschooled and only completed one semester at college before dropping out because of bad grades, on his error:

In his speech, Cawthorn said that at 25, Madison signed the Declaration of Independence.

Except, he did not.
https://t.co/TJBtduXZqt

FACT CHECK: James Madison didn’t sign the Declaration of Independence as @CawthornforNC said in his @GOPconvention speech. Madison did, however, write some of the Federalist Papers along with Alexander Hamilton and John Jay.

Cawthorn responded first by saying he had “ad libbed” the remark, then by saying, actually, no, he was just trying to give fact checkers something to do.

“About the Madison mistake: I ad libbed that line and meant to say James Madison was 25 when the Declaration was signed. Arguably my favorite founder,” he tweeted.

Shortly after that, he added another tweet that said, “After speaking all of that truth… I was afraid the fact checkers were going to get bored. I wanted to give them something to do.”

After speaking all of that truth… I was afraid the fact checkers were going to get bored. I wanted to give them something to do.

In other Cawthorn news, several women recently came forward to accuse him of unwanted and aggressive sexual behavior.

One woman, Katrina Krulikas, said she went on a date with Cawthron in 2014, during which he took her to a “secluded field” and started interrogating her about her sexual history before pressuring her to sit in his lap then repeatedly kissing her against her wishes.

At the time Krulikas was 17 and Cawthorn was 19. She shared the story in a lengthy Instagram post last week:

Cawthorn responded by calling the story “disappointing”… and then admitting to it. He said he kissed Krulikas, but it was “just in a flirtatious way,” adding “If I did make her feel unsafe, I feel bad.”

He did not apologize, however, and then he questioned why she didn’t say anything sooner.

“If she had any problem with this, I don’t see why it wouldn’t have been brought up right away,” Cawthorn said. “I don’t really know what she was trying to insinuate that I was trying to do.”

Related: Gay guys are thirsting over GOP newcomer Madison Cawthorn… but should they be?