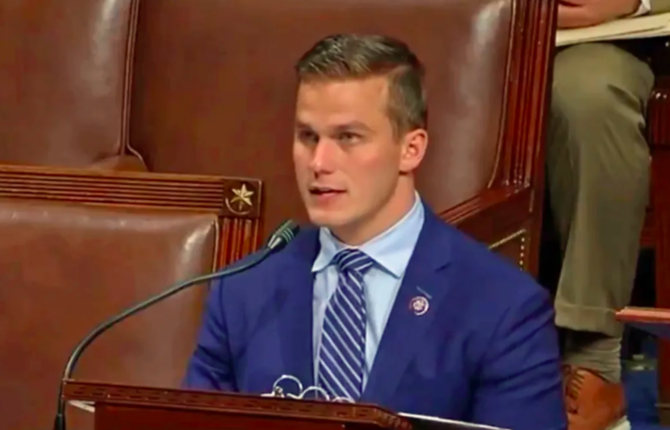 Everyone’s laughing at Madison Cawthorn after he tried schooling his Democratic colleagues about the importance of facts yesterday but then got one of the most basic facts in his speech wrong.

The embarrassing moment happened while Cawthorn was speaking on the House floor during a debate over whether to repeal Donald Trump‘s “true lender” rule via the Congressional Review Act.

In an attempt at sounding like a real life statesman guy, the 25-year-old Nazi enthusiast quoted Thomas Jefferson.

“It was Thomas Jefferson that [sic] said, ‘Facts are stubborn things, and whatever may be our wishes, our inclinations or the dictates of our passions, they cannot alter the state of facts and evidence.’ Let’s cast our eyes over the facts, shall we,” he claimed.

Except that it wasn’t Thomas Jefferson who (not “that”) made those remarks. It was John Adams.

Cawthorn: It was Thomas Jefferson that said facts are stubborn things… pic.twitter.com/LokKpvmxij

In Cawthorn’s defense, he was home schooled for most of his life and only completed one semester of college, where he maintained a D average. And his top staffer, William “Blake” Harp, has zero background in government and virtually no work experience other than a gig at a fireworks stand in Texas.

This isn’t the first time the young lawmaker, who lied about the 2014 car crash that left him partially paralyzed, has gotten basic information about American history wrong either. In the past, he incorrectly stated that James Madison signed the Declaration of Independence, and he wrongly claimed Congress voted to have Lincoln issue the Emancipation Proclamation.

Madison Cawthorn is learning this morning that, yes, facts indeed are stubborn things.

He really needs to pick up a history book

madison cawthorn: it was George Washington who said “it’s the only life you got, so you gotta live it big time”

Madison Cawthorn getting fact checked by Twitter while speaking on the House floor is a treat I'll be enjoying for years to come.

It's also what happens when you hire a friend to work in your office with zero government experience.

Madison Cawthorn: It was Teddy Roosevelt who said, “When I find myself in times of trouble, Mother Mary comforts me, speaking words of wisdom, Let it be” 🙄😀

Retweet if you think North Carolina deserves leadership that Madison Cawthorn is uninterested in providing.

Facts are a stubborn thing.

Honestly, his “communications” staff is not doing him any favors and might really dislike/hate him. Kind of like Meghan McCains hair stylist.

"Don't believe everything you read on the internets."
-Prime Minister Abraham Lincoln, 1979.

Madison Cawthorn- It was Cotton Mather who said “I love it when you call me big poppa. I only smoke blunts if they rolled proper”

I give Madison Cawthorn credit for consistently being wrong about everything.