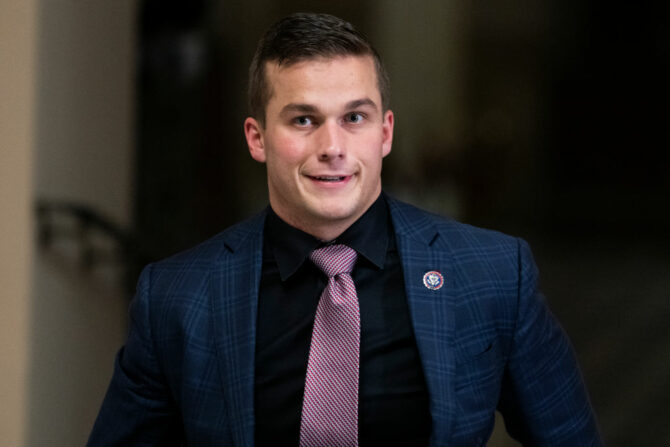 After House minority leader Kevin McCarthy warned the 26-year-old this week that has “got to turn himself around” following his appearance on the Warrior Poet Society podcast, where he bragged about how he’s been invited to all sorts of cocaine-fueled sex parties in Washington, D.C., GOP Sen. Thom Tillis endorsed Cawthorn’s primary opponent, Chuck Edwards.

“Unfortunately, Madison Cawthorn has fallen well short of the most basic standards Western North Carolina expects from their representatives, and voters now have several well-qualified candidates to choose from who would be a significant improvement,” Tillis said in a statement yesterday.

“I believe [state Sen.] Chuck Edwards is the best choice,” he added, noting that Edwards “puts his constituents first” and is a “hardworking conservative leader”.

Cawthorn and Edwards will face off, along with six other candidates, in the May 17 GOP primary to represent the solidly Republican district. Whoever wins the primary is the heavy favorite to win in the November general election.

Several of Cawthorn’s GOP colleagues have denounced his remarks, including Matt Gaetz of all people. Capitol Hill reporter Juliegrace Brufke tweeted yesterday, “Rep. Matt Gaetz tells me ‘I don’t get invited to the same parties Madison Cawthorn does.'”

Rep. Matt Gaetz tells me “I don’t get invited to the same parties Madison Cawthorn does.”

You know you’ve messed up when the guy who allegedly paid for sex with underage girls won’t even support you.

In fact, the only person who appears to be in Cawthorn’s corner is conspiracy theorist Alex Jones, who said on his podcast this week that he, too, has been invited to similar events in the D.C. area.

“I haven’t gone to them,” Jones told Roger Stone, “because I don’t want to be, you know, whatever, blackmailed, or I’m not into that. I’m, you know, happy. But I’ve been invited not just to those, I’ve been invited to the really weird stuff. Not with kids or anything, but with the whole occultic stuff.”

Cawthorn has since tried to walk back the remarks, saying they were “exaggerated” in his meeting with McCarthy. His office, however, has not issued any public comment, although he did retweet an op-ed from the anti-LGBTQ blog The Federalist defending him yesterday.

Interesting that orgygate seems to have really damaged Madison Cawthorn but so many of these Trumpy congresspeople remain completely unscathed by doing far worse.

If you enjoy watching the demise of Madison Cawthorn’s political career, we should be friends.

Madison Cawthorn wants you to forget he voted to overturn the 2020 election.

I had a Republican today tell me privately that Madison Cawthorn & Marjorie Taylor Greene were “hurting the Republican brand.”

“What about Donald Trump?” I asked him.

Madison Cawthorn was a Jan 6 insurrectionist

Kevin McCarthy does nothing

He calls for a civil war

He calls Zelensky an evil thug

THIS is when Qevin finally lays down the law ?

please stop tweeting that I hang out with madison cawthorn