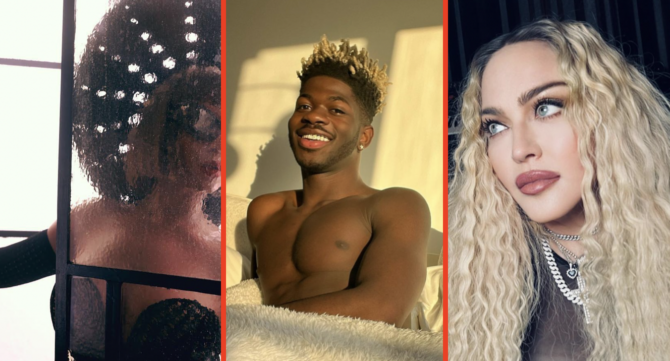 Who knows why everyone waited ’til the last weekend of Pride to drop, but with the wealth of new music we have going into this major Pride weekend, we are NOT complaining.

Well, we are complaining, but not about that:

With the Supreme Court’s recent decision to slam the country’s reproductive rights — and, if Justice Thomas has his way, queer rights — back into the dark ages, now is the perfect time to remember Pride’s roots as a riotous protest. If the spirit of Marsha P. Johnson just so happens to call to you this weekend, so be it.

However! In honor of the component of Pride that stands for joy and celebration of queerness, here are five energizing tracks from this week that should keep your feet moving and your social media doom-scroll interrupted.

The fact that Madonna has fifty (50!) #1 Billboard dance chart hits to compile into an album is testament to the career that she’s had. Her allyship to the queer community is alive and well too; Thursday night’s Finally Enough Love release party was an NYC Pride extravaganza. Even though this week’s release is just an abridged 16-track version of the 50-track release to come in August, it’s still impossible to pick a specific song to feature. Just let the whole remix album get you into the groove!

“Break My Soul” by Beyoncé

What more can be said about “Break My Soul” that social media hasn’t driven home for the past week? Black female-vocal driven, beat-heavy house music is something so deeply seated in gay culture: “Finally”, “Show Me Love”, “100% Pure Love”, the list goes on and on. Here comes Beyoncé enlisting Black queer icon Big Freedia to help bring this era back into the conversation. It’s hard to overstate how wild this is for her queer fans — there were drag queens performing this song literal minutes after it released. If her whole upcoming Renaissance album is like this, wig glue sales are about to go through the roof.

“Away From You” by Zach Campbell

Gay-screaming specialist Zach Campbell is one of the internet’s favorite pop music reviewers. Now, after the better part of a decade uploading videos (including his famous “Bop or Flop” series, infamous to the more Flop-heavy fanbases), Campbell has compiled all the best of his tastes and distilled them into his debut single and video.

Zach, if you’re reading this: are you serious right now? You’re just going to come out the box eating like this? You didn’t wanna give your little viewers one moment to breathe before putting your foot on their necks with these visuals? It’s unacceptable. Thank you so much.

“What I Want” by MUNA

Muna’s entire eponymous album is strongly worth the listen, but “What I Want” is another level of queer fun. The chorus of “I want the full effects, I want to hit it hard/I want to dance in the middle of a gay bar” is surely going to be potent fuel to this NYC Pride weekend’s fire. Here’s to more songs about lesbians going to the club, doing drugs with their girls, flirting hard, and owning it all!

Lil Nas X continues to be a menace, and we continue to stan. His new tantrum track and its accompanying green screen-heavy video are a specific flavor of absurdism that make its inflammatory “F*ck BET” refrain hard to take too seriously. Nas isn’t off base in feeling a nomination was deserved after the smash success of “Industry Baby” with Jack Harlow, or that queer artists aren’t underrepresented at the BET Awards. However, even with a legitimate bone to pick and some strong language to go along with it, the humor in this rollout and Nas’ fun public persona as a whole will probably not have anyone storming BET headquarters any time soon.

In a week absolutely overflowing with releases, we’d like to extend Honorable Mentions to five additional WLW hit-makers who dropped some absolute sapphic slams:

And that’s the selection for this week! See you back here this time next week for another essential bop round-up.