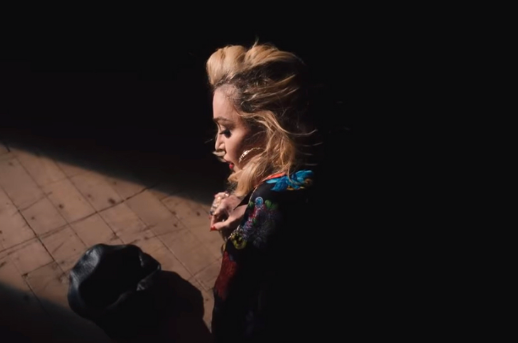 Madonna is nothing if not determined, which is precisely why we love her.

“Crave” is the latest single from the singer’s forthcoming album Madame X, and her third to be released in less than a month.

The song, which hit streaming services at midnight, is about wanting someone who may not necessarily be good for you.

“My cravings get dangerous,” Madonna croons in the mid-tempo track. “I don’t think we should play with this.”

The song features guest vocals by rapper Swae Lee. When asked by Billboard why she wanted to work with him, Madonna replied, “He’s really talented…I think he’s a great writer, a great singer, and he’s so cute. Cute’s important.”

The song failed to catch on, debuting at #17 on iTunes in the U.S. before dropping to #73, and never even making it onto the U.S. Billboard charts.

Meanwhile, the video for “I Rise,” which was uploaded to Madonna’s YouTube channel last Friday, received barely 300,000 views within its first 24 hours, a far cry from the millions of views the star is used to.

Related: Madonna needs to address her own gun fetish before she starts sampling school shooting survivors

And before that, she released “Medellín,” featuring Colombian rapper Maluma, which made little impact on the music charts, although the accompanying music video has garnered an impressive 20 million views on YouTube.

But it looks like Madge’s luck may be turning around with “Crave” because people actually seem to like the song!

Madonna’s new single “I Crave” is a BOP!

OK, phew. This is the first song from the new Madonna album I genuinely love. Crave (with Swae Lee) by Madonna, Swae Lee https://t.co/JuQQ5Q1jhe #NowPlaying

I just heard “Crave” for the first time and I am very very VERY pleased with this song! The first two releases were “growers” for me. This one is definitely my fave so far ???#Madonna #crave #Medellin #MadameX #MadameXWorldTour #swaelee

So much amazing pop music out tonight – including “Crave” by @Madonna and @goSwaeLee which is probably my favorite Madonna ballad since “Gone”. Hypnotic!

Of course, the song has only been out for a few hours, so it remains to be seen how it actually does on the charts and if it gets any radio play.

Madame X is scheduled for release on June 14.

What do you think of “Crave”? Share your thoughts in the comments below.