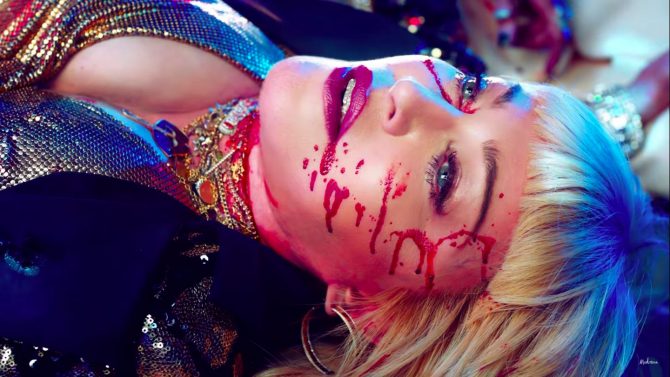 Madonna released her latest music video to her song God Control yesterday and, as usual, it has everyone talking.

The eight minute video was directed by frequent Madonna collaborator Jonas Åkerlund and includes a cameo by Monét X Change.

It makes strong statement about gun violence in America by depicting a horrific massacre inside a nightclub, where a white male gunman enters and slaughters everyone in sight.

The reference, of course, is the 2016 Pulse nightclub shooting.

Later, the video incorporates real-life footage of protesters waving signs criticizing the NRA that read “No one is safe” and “Gun Control Now.”

Many fans have been praising the video, which has garnered over 1.1 million views in less than 12 hours, on Twitter.

#GodControl is an uncomfortable watch. It won't sit well with a lot of people, but I suppose that's what happens when a light is shone on controversial subjects. #Madonna doesn't pull any punches in the video. It's a strong message. #GunControl, NOW. No excuses. #MadameX pic.twitter.com/fUz3PghGXT

Madonna just released a music video w/ layered, deep and meaningful tribute to Pulse and other gun incidents for the past decades. The queen no longer care about the mainstream sound but quality and brilliance are she's working on. We stan the right legend. #MadameX #GodControl

God Control Video had me in tears the time Madonna and friends get shot in the nightclub in music video is around the same time gunman opened fire in Orlando nightclub three years ago! We need to wake up! R.I.P ????? #GodControl #PrideMonth #pride #Pride2019 pic.twitter.com/KdMUJbDR19

However, not everyone has had such a glowing response.

Pulse nightclub shooting survivor, Patience Carter, tells TMZ that, despite being a “grossly accurate” depiction of what happened that horrific night, she found the video to be “insensitive” and “hard to watch,” accusing Madonna of using the deadliest mass shooting in America to gain clicks on YouTube.

“As a survivor of gun violence, it was really hard to watch,” Carter explains. “I understood what she was trying to do with bringing awareness to the topic of gun control, but I definitely felt that wasn’t the right way to go about doing it.”

Carter continues: “You could not think about the person that was actually in those incidents, that actually lost someone, that actually had to experience that bloodshed firsthand. Think about how they would feel reliving, because that’s what it is, reliving this all over again. And it’s bringing up that pain, all that healing, all that growth can crumble with one video.”

In Madonna’s defense, she does warn viewers at the beginning of the video that it contains graphic scenes of gun violence; however, there are many others seem to agree with Carter.

No. Madonna should not have recreated scenes from Pulse for her music video. I don't care what. I don't care about the warning, I still wasn't ready to see queer people being shot on film. Honestly. Find another way to share that message.#godcontrol

As much as I respect the right of any artist to express a narrative that may not fit a particular mindset, I’m not sure how I feel about Madonna releasing a video that seemingly is centered on a bunch of club patrons being shot up during LGBTQ+ Pride Month.

The new Madonna video is quite on the nose, no? Glamourising club shootings? Sure.

Watch the video for God Control below. [WARNING: The video below contains graphic content.]

Related: Madonna needs to address her own gun fetish before she starts sampling school shooting survivors