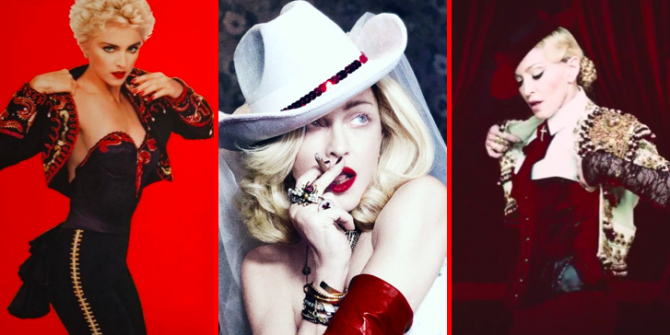 This week, Madonna released her latest single Medellín featuring Colombian singer Maluma off her forthcoming album Madame X which is due out in June.

The bilingual mid-tempo bop has received mostly positive reviews from critics and fans, and is being praised by many as a return-to-form for the highest-selling female artist in history.

But this isn’t Madonna’s first time  celebrating Latin culture. Or even her second. Or her third. Over the course of her impressive 30+ year career, the hitmaker has released a number of Spanish-language songs with varying degrees of success.

Without any further ado, we’ve ranked eight of Madge’s Spanish-language songs from the very worst to the very best…

Ranking at the absolute worst is the embarrassing tenth track off Madonna’s 2008 album Hard Candy in which she spews off incorrect Spanish translations in a gringa accent for three-and-a-half agonizing minutes much to everyone’s unease.

Madonna channels her inner Carmen Miranda in this vaguely racist, Salsa-themed jingle from her 1990 soundtrack album I‘m Breathless from the movie Dick Tracy. Perhaps the only thing keeping this song from being deemed her absolute worst song of her entire catalogue is that it’s only a minute and 41 seconds long and clearly not supposed to be taken seriously.

Madge both wrote and lent her vocals to this sleepy duet that appeared on Ricky Martin‘s 1999 self-titled album. The song, which sounds like a throwaway track from her 1998 album Ray of Light, was never released as a single, though it did get a slightly more palpable remix by DJ Sebissimo almost 20 years later in 2018 that’s worth a listen.

Neither here nor there, the Spanish rendition of Madonna’s song “What It Feels Like For A Girl” from her 2000 album Music was included in her Drowned World Tour in an effort, we assume, to prove she can speak Spanish, damn it! Or at least memorize enough words to sound like she speaks Spanish.

The Spanish version of Madonna’s song “You’ll See” from her 1995 compilation album Something to Remember was a pleasant and unexpected surprise. It was recorded at Gloria and Emilio Estefan’s studio in Miami (naturally) and was included as a bonus track on the Latin American editions of Something to Remember.

OK, now we’re onto the good stuff… The theme song to Madonna’s 1987 movie Who’s That Girl featured a Spanish chorus (“¿Quién es esa niña?/¡Senorita mas fina!”) that was simple enough for her to perform convincingly and catchy enough for fans to remember so they could sing along.

Sometimes titled “Pray For Spanish Eyes,” the penultimate track from Madonna’s game-changing 1989 album Like A Prayer is a sad ballad decrying gang violence in the barrio that frequently finds its way onto lists of “most underrated” Madonna songs.

Coming in at number one is the tropical track from Madonna’s 1986 album True Blue. At the time, she called the song a “tribute to the beauty and mystery of the Latin American people” in an interview with The New York Times. It remains one of the shiniest gems from her early career.