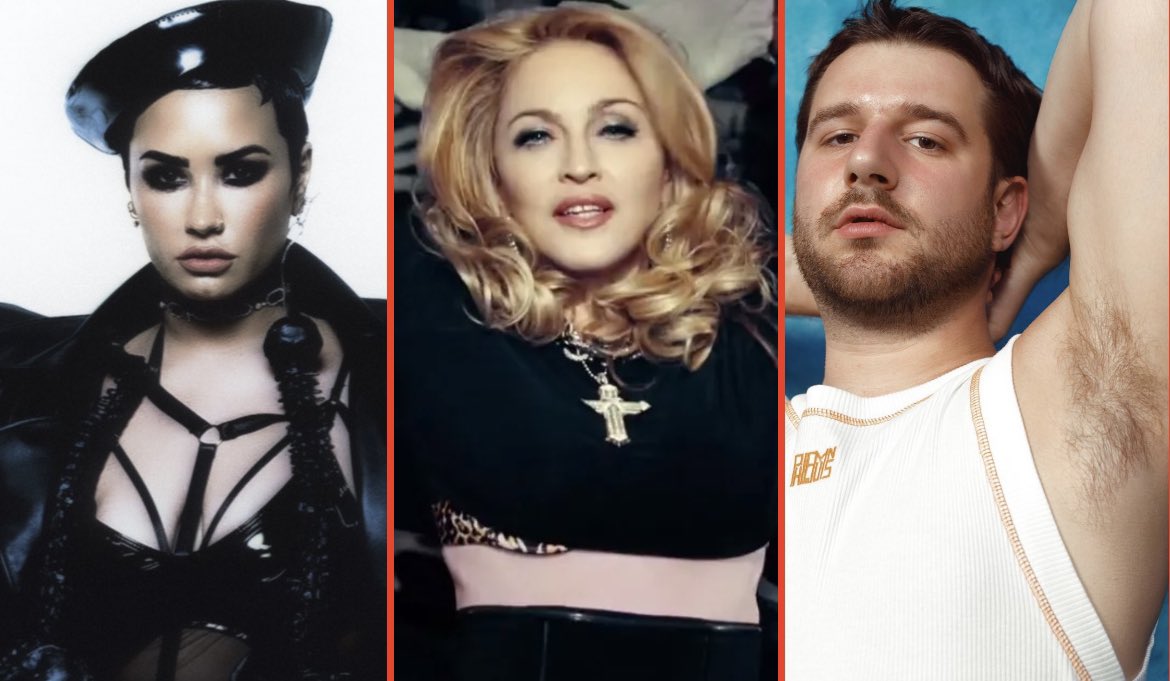 “Never send to know for whom the song bops; it bops for thee.” – Ernest Hemingway, kinda

Art imitates life, of course, so you know we’ve got only the hottest of music collaborations out this week.

From giving Madge your all to a country boy roll-call, here’s your weekly bop roundup:

“FREAK” by Demi Lovato and YUNGBLUD

Demi has finally released her/their new record HOLY FVCK, and it opens with a slamming queer collab. “Parents” singer Yungblud is a total fit for Demi’s new, rockier sound. If folks didn’t treat “pop punk” like a dirty word, it would feel fitting, but let’s call it garage-lite. This song has so far gone pretty overshadowed by another track on the album, “29”, which has Demi’s age-inappropriate ex in hot water. Hopefully fans can at least enjoy this jam in the background while they’re dragging him on Twitter.

“Give Me All Your Luvin’ [Party Rock Remix] – 2022 Remaster” by Madonna feat. LMFAO & Nicki Minaj

We FINALLY have the full version of Finally Enough Love, with all fifty of her #1 dance hits. This track isn’t exactly considered classic Madonna, but now that the original is officially a decade old, that might need to change. It’s such an unlikely assemblage of folks that it hits almost in a “it’s so crazy, it just might work” way. The cheerleader repetition of “L-U-V Madonna!” WILL get stuck in your head, but that’s part of the charm.

“LFG” stands for “Let’s [Expletive] Go”,  and that’s exactly the mood this bop sets you in once it really ramps up. Angelides’ lines get run through this just hyper-pop adjacent vocoding that catches the ear in such a specific way, and Chapman’s music keeps you moving right along with them. Also, sorry, but have y’all seen Alex Chapman’s thirst traps? Not to be crass, but LFG.

Now THIS is exemplary dance-pop. If you looked up “dance-pop” on Wikipedia, this should be liable to start auto-playing like it’s some club gay’s personal MySpace page. Dave Audé and Zee Machine instantly make one of those producer/vocalist pairs that begs to be replicated again as soon as possible.

Gay cowboy phenom Cameron Hawthorn can feel free to boot-scoot his way right on over here. This little country meander through Hawthorn’s Little Black Book is as fun lyrically as it is to dance to, and the production takes it to an eleven. Going straight from a driving club beat to a stomp-clap? That’s culture, right there.

Join us back here next week for another bop roundup!