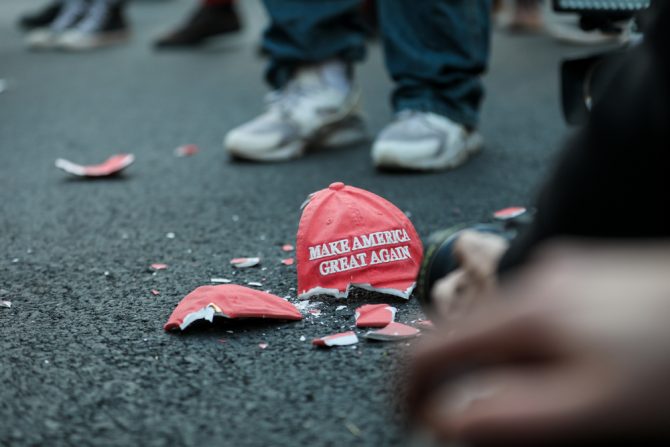 The “Million MAGA March” held in Washington D.C. over the weekend failed to live up to its name when only a few thousand people turned out to rally behind soon-to-be-ex President Donald Trump one week after he officially lost the election to President-elect Joe Biden.

The event was organized by Women for America First and stepped off from Freedom Plaza around noon on Saturday, with red-hatted attendees chanting “Four more years!” while waving Trump, American, and Confederate flags.

National Park Service was on site to keep an eye on things, but it became abundantly clear pretty early on that the march wasn’t going to require much, if any, crowd management.

Among those in attendance were antigay conspiracy theorist Alex Jones, former Tea Party activist Amy Kremer, about 100 members of the Proud Boys, and people from the far-right militia groups “boogaloo bois” and the Three Percenters.

At one point, the crowd caught a brief glimpse of their cult leader, Donald Trump himself, when he cruised by in his motorcade on his way to the golf course and smiled gleefully from his car window.

President Donald J Trump looked genuinely happy as he drove through the crowds in Washington D.C. over the weekend. pic.twitter.com/UvLW0apzrQ

Despite falling approximately 995,000 short of the 1 million people expected to attend the event, Trump’s camp still claimed it was a huge and historic success.

White House Press Secretary Kayleigh McEnany tweeted: “AMAZING! More than one MILLION marchers for President @realDonaldTrump descend on the swamp in support. Best base in political history — we LOVE you guys!!!”

More than one MILLION marchers for President @realDonaldTrump descend on the swamp in support.

Best base in political history — we LOVE you guys!!! ???? pic.twitter.com/vU65nqCSns