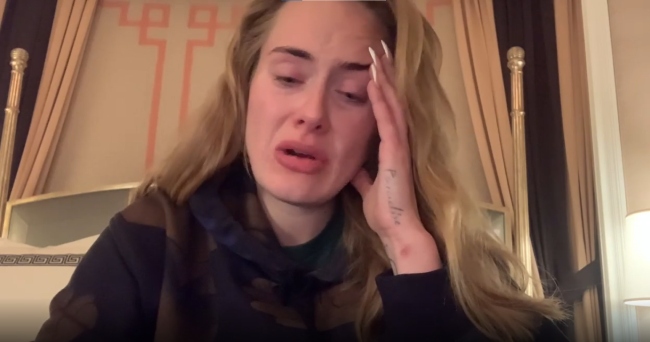 As fans continue to moan over last week’s sudden cancelation of Adele’s hotly-anticipated Las Vegas residency, new details have emerged revealing some major behind-the-scenes drama that allegedly happened in the lead-up to the announcement.

The 33-year-old singer was set to open her Vegas residency, Weekends with Adele, last weekend at Caesar’s Palace. But on January 20, both she and the venue announced the entire slate of shows–which would have run every weekend through April–would be postponed due to “delivery delays and COVID.”

Now, The Daily Mail reports there’s more to the story than just that. Apparently, the singer had engaged in a protracted fight with set designer Esmeralda Devlin, who had previously designed her 2016 tour, prior to the show’s cancelation.

“In spite of the set costing millions to put together, Adele was unhappy with the result, and she made her feelings very clear to Es,” a source told the outlet. “She was already nervous and the falling-out sent her spiraling into a panic because she was desperate that everything should be perfect.”

A second source appeared to corroborate this, citing the “endless changes” being demanded by the hitmaker.

“There was no real clarity around what Adele wanted for the show because of the endless changes being made to the production,” the second source added. “It seemed that while she has always preferred a stripped-back performance, she was under some pressure to come up with a huge extravaganza. “

They continued, “So there was a constant ricochet between those two versions of what the show should be, and it did cause some quite explosive arguments. Most shows have teething problems of one kind or another, but there has been a feeling for some time that these shows were heading for disaster.”

“It is well known that Adele suffers badly with anxiety when it comes to performing live, so it’s hard to imagine her going ahead if she wasn’t happy,” the source also said.

This latest report emerges after Adele posted a teary-eyed apology video posted to Instagram. She blamed a sudden outbreak of COVID-19 among her crew for the need to scrap the shows.

Conspicuously, however, Caeser’s Palace failed to make mention of the outbreak when it announced the cancelation, leading to speculation that the virus may not be the only reason for the last-minute change.

Over the weekend, gossip columnist Roger Friedman at Showbiz 411 claimed that the scrapped performances had more to do with the backstage bickering.

“The whole Adele Vegas residency is a disaster,” he wrote. “But ‘We ain’t ready’ at the last minute doesn’t hold water. This isn’t the Rolling Stones stage show. Adele live is her, an orchestra and some lighting. She’s not sailing across the theatre in a hook-up, there are no pyrotechnics.”

Friedman added, “If the show wasn’t ready, it could be postponed a couple of weeks, and the missed shows could have been rescheduled at the end of the run. But they’ve scrapped the whole thing… so it’s not just a matter of not being ready…doesn’t make sense.”

Adele fans, are now really screaming, Oprah Winfrey has flown to be by her side, she’s now cancelled the whole concert for three months. Blaming the crew and Covid 19. pic.twitter.com/BD6HgYHfdo

Some are creating hatred to @Adele for not refunding.I know money is hard to find however do not hate our mummy please.Refunds will be a key to reduce their nonsensical thoughts.The promoters are making money using @Adele and all she receives will be hatred.#WeekendsWithAdele pic.twitter.com/nFdlL2vMRK

My stomach is in knots. We have our flights and hotel booked already. This makes me so sad. Hoping we can get our money back. #Adele #WeekendsWithAdele https://t.co/DAleno2adW

They really need to set up an online store for this merch, since no one is going to Vegas now. #WeekendsWithAdele pic.twitter.com/th6qJDVwIX

Adele has to personally fly her out because this is chaotic. ? pic.twitter.com/bXJ9OaB8vR

Crazy to cancel her residency THE DAY BEFORE before she is set to open in Las Vegas… but Adele fans are used to heartbreak. #Adele  #caesars #adeleomg  #lasvegas #WeekendsWithAdele #canceled #residency https://t.co/nEiOxIqWrp

I cancelled my flight to Dallas, sold my Ateez ticket, and decided not to see Adele. I'm very sensitive and sad rn fr ? but I can't risk traveling

If reports are true that Adele cancelled with 24 hrs notice due to a diva strop with her management, she ought to reimburse her fans out of her own vast 200 million fortune. pic.twitter.com/frsHZ6y3jb

Nothing like priorities is there @BBCNews – dear old filthy rich Adele bleating on about her cancelled concert takes priority on the news and hardly anything reported on the horrendous lorry queues in Dover as a result of Brexit catastrophe.