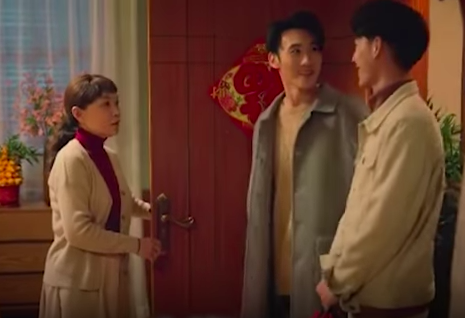 One the largest tech company’s in China is being applauded for its latest gay-friendly ad.

Alibaba is an e-commerce and tech multinational conglomerate. The multi-billion dollar company just released a 20-second commercial that shows a gay couple returning to one of their homes for Chinese New Year.

The ad starts with one of the guys introducing his boyfriend Kelvin to his mother. The camera then cuts to his father eyeing the men suspiciously while two girls, presumably in on the secret, giggle at the table. The ad concludes with a narrator promoting a site-wide discount for the coming holiday.

LGBTQ representation is still very uncommon in China, where queer people are often subject to discrimination and state censorship and where same-sex couples cannot marry or adopt.

Many on Twitter are praising Alibaba’s ad for its sweet and subtle representation of same-sex love.

Meanwhile, over on Weibo, China’s version Twitter, one person said: “It doesn’t directly support or not support [same-sex couples], but the fact that we can see it is already an amazing step.”

Alibaba issued a statement saying: “Chinese New Year is a time for family reunion and inclusion, and the ad is a creative expression to celebrate such an occasion.”

This isn’t the first time the company has been supportive of China’s LGBTQ communities either. In 2017, it flew 10 same-sex couples to Los Angeles so they could get married.