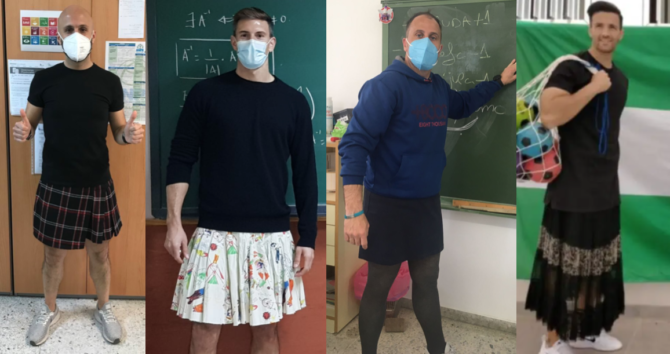 A group of male teachers in Spain have been donning skirts to teach a serious lesson in acceptance after a boy, Mikel Gomez, 15, was expelled last year for wearing one to class.

#LaRopaNoTieneGenero (#ClothesHaveNoGender) came to life in October 2020 after Gomez was expelled and referred to a psychologist for showing up to school in a skirt in Bilbao in the Basque Country.

His video about the ordeal on TikTok quickly spread, garnering over 588K likes to date.

His math teacher, Jose Piñas, was one of the first to pick up the torch. In November, he posted:

“20 years ago I suffered persecution and insults for my sexual orientation in the institute where I am now a teacher. Many teachers, they looked the other way. I want to join the cause of the student, Mikel, who has been expelled and sent to the psychologist for going to class with a skirt.”

Now even more teachers are joining the trend to combat bullying and promote diversity.

Manuel Ortega, 37, and Borja Velázquez, 36, from the public school Virgen de Sacedón in Valladolid noticed one of their students being bullied because he liked Manga, the Japanese art form.

Having been moved by Gomez’s story and the reaction from his teachers, they decided skirts were the way to go.

They posted their photos to social media, and later explained to Teen Vogue they wanted “to show that we should be open to change and that words cause harm.”

Velázquez wrote on Twitter : “A school that educates with respect, diversity, co-education and tolerance. Dress how you want! We join the campaign #clotheshavenogender.”

So far, the participants say the response has been positive — though they’ve received their fair share of criticism, too. They hope the images and personal stories will help spark conversations around gender stereotypes and acceptance.