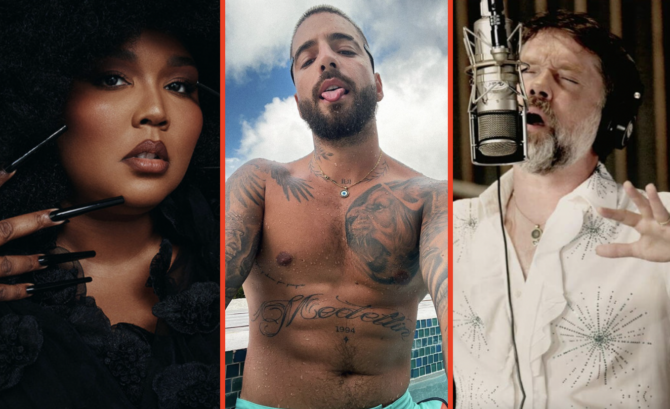 Weekend check-in: how are we doing out there, gays? We know that first Pride weekend was a wild one, but hopefully everyone’s recuperated enough to beat the heat and move your feet again this weekend.

As always, the new music drops of the week are here to help us turn up and show out. Here’s your weekly bop roundup!

While this one might not technically qualify as a bop, we don’t think any gay with a modicum of taste will object to this track being highlighted. Obviously the Judy and Barbra version will never be outdone, but Wainwright had no intention of trying to show Garland up on his Rufus does Judy at Capitol Studios project. Cover-to-cover, the album is clear rapturous homage, and among the most lovingly handled tracks on the work is this iconic duet.

Lizzo’s last single “About D*mn Time” took it’s time climbing the charts, but now it’s sitting up rightfully where it belongs, and hopefully “Grrrls” is on its way to join it. Lizzo’s place in pop is already so solidified with a clear lane that she can continue to expand without departing from it, and “Grrrls” is the kind of booty-shaker that will only lend itself to her roster.

Speaking of booty-shakers! We don’t know how in the world Santana managed to clear the “Crazy in Love” sample — Parkwood Entertainment could very well be in contact soon — but it helps the song live up to its title. Saucy Santana has been on the scene for a minute now, but Tiktok blowing up his song “Material Girl” is one of the few blessings to come out of that chaotic little app. Long live the Black queer fems in music.

“Skin of My Teeth” by Demi Lovato

Post-Disney popstar They/Themi Lovato is officially back, and a whole new sound has emerged out of the highly-publicized troubles of their teens and twenties. Well, they’ve had a little rock in them since the Don’t Forget days, but nothing like this; the song opens with “Demi leaves rehab again/When is this sh*t gonna end?” It has a bit of a “Celebrity Skin” sound to it, but then again, Hole being on the moodboard for Demi’s new era wouldn’t be out of place.

Sometimes world-class heartthrob Maluma has us so busy twirling our hair and kicking our feet in the air that we forget he’s first and foremost a great musician. His new album, The Love & Sex Tape, is kind of the best of both worlds in those respect; he knows he’s the kind of hottie who can do things like land the dashing Mariano role in Encanto with a look, and the last thing’s he’s going to do is shy away from it in his music. The entire album is a raunchier move for Maluma that takes him back to his Pretty Boy/Dirty Boy roots, and the clashing friend-with-benefits storyline in “Nos Comemos Vivos” is one we absolutely welcome.