For a woman with only three films under her belt, Phyllida Lloyd has already had a Hell of a career. Her latest outing, Herself, lands on Amazon on January 8, 2021.

A Brit by birth, Lloyd started her career on the British stage, eventually landing jobs directing for the Royal Shakespeare Company. Commercial success followed in the West End, particularly in 1999 when Lloyd landed the job directing the ABBA-based jukebox musical Mamma Mia on the London stage. The show became an international hit, and Lloyd found success in the US thereafter staging the show on Broadway.

Mamma Mia also opened doors for Lloyd in Hollywood, as she scored her first directorial outing behind the camera with the 2008 film adaptation of the show which starred Meryl Streep. Though the film received mixed reviews, it became major success and earned a devoted cult following. Lloyd reteamed with Streep in 2011 for the Margaret Thatcher biopic The Iron Lady, for which the actress won her third Academy Award.

Now Lloyd steps behind the camera for her third feature film, and her most personal to date. Herself follows Sandra, (Claire Dunne) a single mother of two young girls trying to put her life together after escaping an abusive marriage. When she can’t find a home of her own, Sandra opts to build her own home herself with the help of some trusted friends. When her estranged husband sues for custody of the kids, Sandra finds herself wrestling with her newfound purpose, and the temptation to fall into old traps.

We’d initially planned to sit down with Lloyd in January 2020 at the Sundance Film Festival, where Herself played to strong reviews. Almost a year later, we finally got our wish. Herself lands on Amazon on January 8, 2021.

I know Claire Dunne (Sandra), your lead actress, wrote the film as well. How did you get involved?

Claire and I were working together, also with Harriet, who plays Peggy. We were working together in an all-female theatre collective performing Shakespeare with women in prison. We did that for five years and we were very preoccupied by a number of women who had found their way into the criminal justice system from childhood domestic violence. Then, one day, a friend of Claire’s became homeless. Her landlord evicted her. The city of Dublin couldn’t find anywhere for her to live, and Claire was just outraged at the housing crisis. She just sat down and thought I’m going to imagine my friend into a different future.

So we were working together. She did a draft or two and gave me a draft to read as a friend, for notes. And I immediately thought this girl has never written a script before? There was so much that was—to coin a phrase—of herself in it. She’d written a character that wasn’t a victim. It’s full of character, of highs and lows, and ultimately, is a message of hope. It’s not a fairy story, but it’s about a woman rebuilding herself.

The other thing was that Claire was not thinking about playing the lead herself. She was just thinking she wanted to get the goddamned script made. She’d written a small part for a sister character in it. Then one day, I heard someone say “Claire has written a role for one of those great movie actresses.” And I thought yeah, her! She’s the actress! She was really struggling to find work on screen. At that point, I said I would direct it and make sure she would play Sandra. And our producer, Sharon Horgan, came aboard and backed us 100%. And that was it.

That’s a wonderful story unto itself. When you’re directing the writer like that—obviously Claire already had a strong connection to and understanding of the material. How does it affect your approach to guiding a performance? What kind of conversations do you have? I ask this because I know so many stories of screenwriters who fulfill another role on a film—acting, producing—who feel like they have their authority stripped away from them.

You know, it’s odd. Compared to the theatre, a writer is God. It’s strange. On a movie set, the director is god and the writer usually isn’t there.

The director has to have a screenplay and have it in her head by [the time of a shoot]. So it’s never been my experience that a writer is an impediment. By the time we got on the set, I had a lot of experience directing Claire as an actress. And really, I wanted to get her to go further than she’d ever gone before, or pull back if she felt she was going too far. It’s a very practical relationship. There were never any arguments about the script. I’d say to her, for example, “The children are unable to make this line. It’s artificial. I’m going to improvise it.” And she’d say “Go for it.” So it was very easy. At a certain point, she wants to be playing the lead and inside the role, not worrying about what the words are. And of course, she’d be on the bus going over it, wondering if we should make a change here or there, wondering will this work. But it wasn’t like we were arguing about it. We’d already been through so much together.

That’s a wonderful working relationship. Speaking of the children, young Molly and Ruby Rose are quite good in the film, and they’re not very experienced. How do you go about directing them to get such good performances?

I’ll tell you one story about Molly McCann, the younger one. Ian, the father, was strapping her into the back of the car. In the script, she was to say nothing. He was supposed to say “Are you alright, Mol?” She was tired and drifting off. And every time he strapped her in, she went “I’m fine.” And I was saying “Don’t say a word, Mol.” So, take two: “Are you alright there Mol?” And “Yeah, I’m alright.” Eventually, with time running out, I said to her, “You’re not going to say another word to him until he says sorry to your mum.” And she turned to me with this withering stare, and said “Is sorry enough?”

I thought, oh my God, this child is fast-tracking to becoming Lady Gaga. She’s so wise. So she didn’t need me patronizing her. They were very clever kids, very funny. They were like little soldiers. As soon as I said “cut,” they were right back to their marks ready to do the next take.

One thing the film does very well is capture the confusion of an abusive relationship—the feeling of loving and fearing someone at the same time. The feeling of being loved and hated at the same time. When you’re dealing with portraying contradictory feelings like that, how does it affect your approach to the scene? To directing the actors?

Well, I think, at the base of it, we were looking at it from Sandra’s point of view. So we don’t have much of the backstory of Gary. We understand there’s a history of abuse in the family, which tells the audience a lot. From the beginning, we wanted to honor that fact. Sandra had gone into the relationship loving him, and it started really good. That was a way of raising the stakes on the loss between them. Love like that doesn’t just vanish.

There may be all kinds of complex reasons for him abusing her. Not to forgive it, but she understood somewhere it was coming from. I think that was such an important moment: when she says “I miss him,” that sense of profound loss. It wasn’t that she wanted him back, she missed who he was. So you’re watching someone in post-traumatic shock, and of grief. She’s grieving for their relationship and going through this PTSD, blocking out the memory of her daughter having seen her father abuse [Sandra].

And one of the journeys of the edit—I’d shot something more extensive and horrifying with the actual abuse at the beginning. The more and more I got inside the post-traumatic shock I began to show less and less and less. It was almost as if Sandra herself had closed down on what happened to her. As she got more healed, in a way, it would reveal itself to her.

You’re riding a lot of career success right now, with Mamma Mia and The Iron Lady. You’re also a queer woman. You’ve made some very big hit films. I’m wondering, how does that affect the kinds of movies you’re offered? How do you feel like the business looks at you?

You know, I’ve had such a curious journey in the film world. Most people want to get to bigger budgets. I’ve been trying to do the opposite.

Actually, to get more down to Earth, to something more aligned with the work I do in the theatre, which is more social mission-driven. Everybody involved has a stake in it. My first film [Mamma Mia] was both one of the most hated and loved films of the last…I don’t even know how long.

I was vilified for how clunky it was. But at the same time, there was a cult that grew up around it. People thought it was so clunky and hokey it turned them into fanatics. So it’s been very odd. A lot of cineasts vilified me. So to get back to the place I’ve got to know—this sounds strange—but it’s been hard to persuade the colleagues around me that I really do want to work in a down and dirty, stripped back, no stars, politically driven context. People almost believe it when you say “This is where I want to be.” 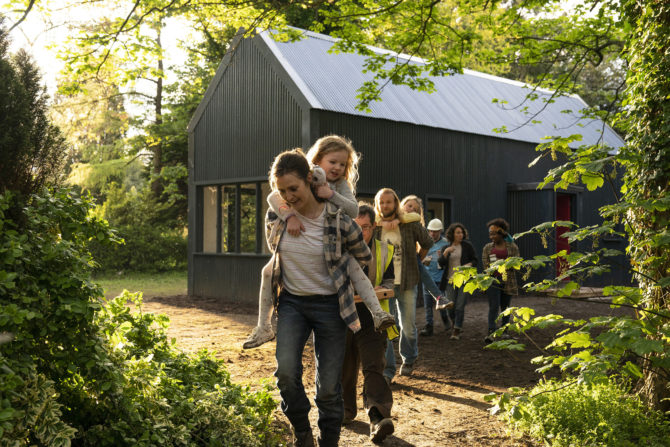 I don’t know that had I been a straight white guy whether this would have been easier, or whether any of the kind of inhibitions to my progress or cohesiveness are in my generation’s lack of entitlement to be who we really were. I feel like, when I look at my colleagues in this all-female Shakespeare troupe, that generation is so much more entitled and together and less neurotic than we were. They’re less neurotic about sexuality, about choices, about entitlements, about being both an actress and a writer. I thought I was lucky because I just had a job when I started. And I feel like, what we’re watching, is the march of progress in terms of women’s identity. Things are a lot healthier than when I began. If I have any regrets, it would be that I would like to have been born now in terms of someone coming into the movie world.

I also think women are—whether it’s gay women, or even queer people generally—it’s so gratifying to feel people’s voices are being heard now in a way they weren’t before.

Thank you for contributing to those voices. So where do you go from here?

I’m going back to the theatre for a moment. I’ll be looking to do more of the work like Herself on screen. Similar, but different.

Herself lands on Amazon January 8.